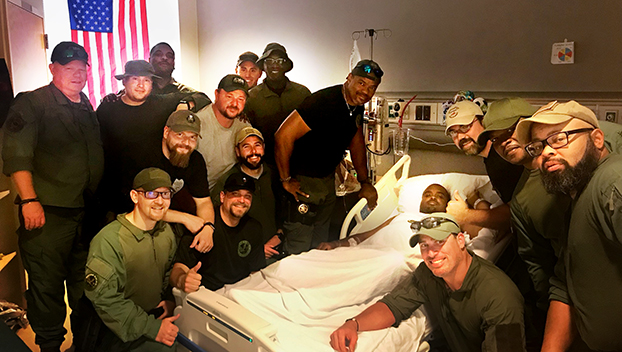 A Concordia Parish, Louisiana, sheriff’s deputy shot in the line of duty around noon Thursday was still recovering in a Jackson hospital Monday.

Deputy Walter Mackel and the suspect, Kaleb Melton, 21, of Vidalia, exchanged gunfire while authorities reportedly worked an armed robbery investigation Thursday at an apartment complex on Carter Street in Vidalia.

Mackel’s wife, Pamala Michelle Mackel, said her husband had been shot underneath his arm where the bullet entered through his abdomen and struck both his lung and kidney. Mackel is a Natchez, Mississippi, native, where he father was a career police officer.

Walter Mackel is still undergoing treatment at the University of Mississippi Medical Center in Jackson.

Authorities found Melton in the apartment dead of a gunshot wound Thursday afternoon after he had barricaded himself inside.

The fatal gunshot wound is believed to have been caused when Walter Mackel returned fire.

Pamala Mackel said Monday that her husband’s treatment included tubes in his lung and stomach, both of which were removed by Sunday evening.

“He is doing far better as far as his wounds go but is experiencing other issues,” she said. “They never did take the bullet out to avoid causing more damage. … They took him off medicines and he’s been in a lot of pain and seems out of it. You don’t realize all of the issues this would cause as far as the process your body has to go through to recover until it happens.”

Pamala Mackel said doctors are still unsure of when her husband could be discharged or whether his injuries would cause any lasting physical complications.

“Mentally this experience will likely stay with him for the rest of his life,” she said. “Only time will tell if he will have any lasting physical issues. When he can leave all depends on how fast he can meet certain goals the doctors have for him. For instance, he needs to eat, become mobile, be off of oxygen, etc.”

To her and many who know him, Pamala Mackel said Walter Mackel is a hero who fights every day to provide for his family while protecting others, “all the while doing his best to keep his promise to come home to me and our kids at the end of each shift,” she said.

“You can ask anyone why he’s a hero and everyone you asked would have a different story,” she said. “I watched every day as he dedicates his life to helping others.”

Before he started to work with CPSO more than two years ago, Pamala Mackel said Walter Mackel worked for the Adams County Sheriff’s Office and is a veteran.

Walter Mackel was deployed to Iraq three times, Pamala Mackel said, where he worked as a medic for the U.S. Marines.

Pamala Mackel said this experience wouldn’t have been the same without the support, gifts, love and prayers she and her husband received from people almost everywhere.

“It has been overwhelming,” she said, “all of the support and prayers and gifts and love we’ve received. There are no words to describe how grateful we are and what it means to me. I can’t imagine being here without that support. … Right now we’re just making sure he’s healthy and continues to make progress. … I thank everyone for their continuous prayers and support. I couldn’t go through this without you.”

Concordia Parish Chief Deputy David Hedrick thanked all who responded, both on and off the scene Thursday.

“We’ve had an outpouring of sheriff’s, federal and state agencies and members of the community too have been calling to show their support,” Hedrick said Friday evening. “We are very appreciative of that. Everyone did an outstanding job of staying calm and handling the situation.”