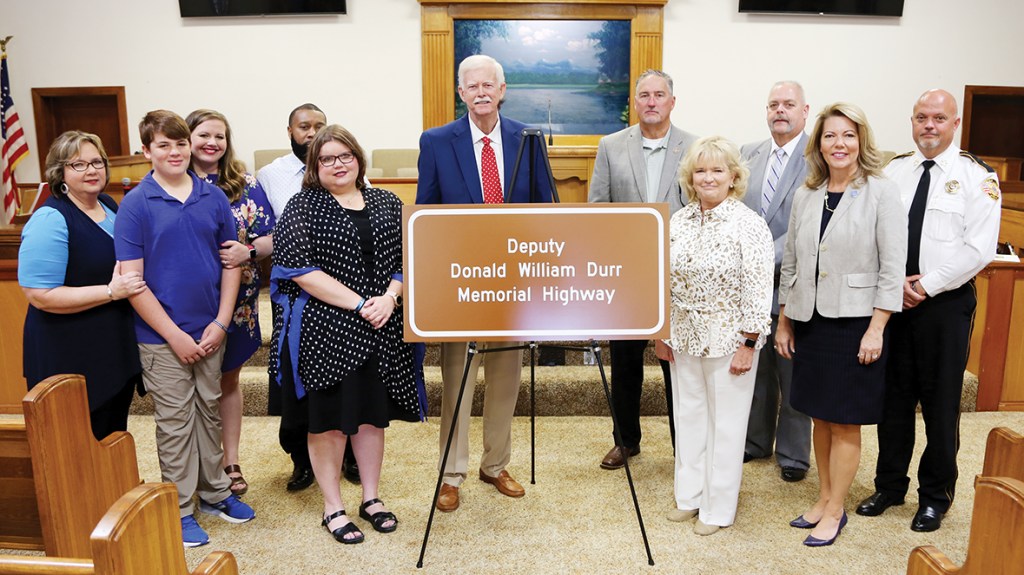 A section of Hwy. 51 that stretches several miles from Lee Drive north to Cold Springs Lane will honor a Lincoln County deputy who was killed protecting and serving his community.

The late William Durr’s friends and family joined dozens of people from Lincoln County as well as representatives from the Mississippi Department of Transportation and the Lincoln County Sheriff’s Office for the memorial dedication at Moaks Creek Baptist Church Tuesday. Durr, his wife Tressie and his son Nash attended Moaks Creek, where the Durrs were active in youth ministry.

Durr, a former Brookhaven police officer, had been a deputy with the Lincoln County Sheriff’s Office for four years until his death May 28, 2017, while responding to a domestic call. He and seven other people were killed that weekend. He was 36.

“When men and women of law enforcement put on their uniforms and head out the door each morning, they never know what each day will bring,” Southern Transportation District Commissioner Tom King said. “But they know their job is to ensure their community is safe.”

“We recognize deputy Durr’s sacrifice with this memorial highway dedication to remind every person that drives down U.S. Hwy. 51 that deputy Durr put the safety and well-being of his community before his own,” King said.

Currie spoke about the impact Durr had and still continues to leave on the community he served.

“He just went to work like any other day,” Currie said. “We still haven’t forgotten and we never will.”

Currie got the ball rolling on the bill to designate a portion of the highway in Durr’s name, meeting first with the Lincoln County Board of Supervisors to get their OK and then taking her request to the Senate and her peers in the House of Representatives. Written in November and presented in January, it was one of the first bills passed during this year’s executive session. The governor signed it March 15.

Rushing spoke about Durr’s love for children and serving others. He shared endearing stories of the late deputy’s antics.

“He’s always been a servant and that’s what I remember him as,” Rushing said. “William was the greatest servant I could ever know.”

The stretch of highway was chosen to honor the heroic law enforcement officer because it included Norfield, where Durr’s death occurred, and the intersection of Hwy. 51 and Bogue Chitto Road where a memorial is in the works for the eight people who were killed — Durr, Barbara Mitchell, Brenda May, Toccara May, Jordan Blackwell, Austin Edwards, Sheila Burage and Ferrel Burage. All of the victims except for Durr were related.