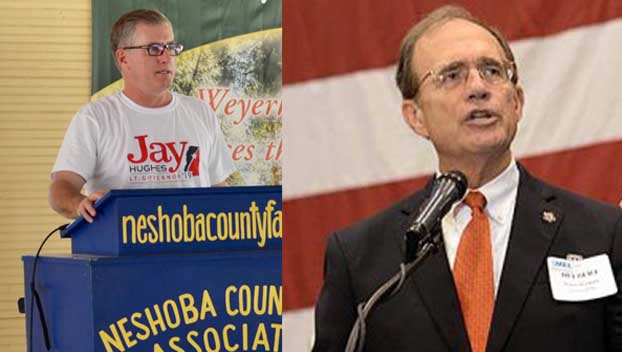 Two attorneys running for Mississippi lieutenant governor agreed on some policy issues but traded insults during speeches Wednesday at one of the state’s biggest political events.

Hughes said his own blue-collar upbringing better prepares him to be lieutenant governor. Hughes said of Hosemann: “He was born with a silver spoon in his mouth and I was born with a plastic spoon in mine.” That drew loud booing from Hosemann supporters sitting and standing under a large tin-roofed pavilion on the fairgrounds.

Hosemann was booed by Hughes supporters when he called Hughes a “liberal.” Hosemann also said: “I don’t just talk about getting things done. I do them. (It’s) beyond me how someone can serve four years in the Legislature and have so little influence.”

Hughes is unopposed for the Democratic nomination. Hosemann faces Shane Quick of DeSoto County in the Republican primary on Tuesday.

Quick is a political newcomer who works in health care and is running a low-budget campaign focused on limited government. He said Wednesday at the fair that he represents the “rough-handed, blue-collar workers” who want to keep the Confederate emblem on the Mississippi flag.

The Neshoba County Fair bills itself as “Mississippi’s Giant Houseparty.” For more than a week each summer, extended families live in shotgun-style houses, some of them two or three stories tall, in the red clay hills south of Philadelphia. Politicians and their supporters converge on the fairgrounds for three days of stump speeches — one day by local candidates and two by candidates for statewide and regional offices.

Democrat Johnny DuPree and Republicans Michael Watson and Sam Britton, who are running for secretary of state, spoke Wednesday.

DuPree said that as Hattiesburg mayor from 2001 to 2017, he never raised taxes. He said he wants Mississippi to stop using electronic voting machines and return to using paper ballots.

DuPree faces first-time candidate Maryra Hodges Hunt in Tuesday’s Democratic primary. She was invited to speak Wednesday but did not show up. DuPree asked Republicans to put aside partisan differences and vote for him in November.

“I guaran-darn-tee you, if we’re going to move Mississippi forward, we’ve got to put down all the other stuff that has kept us behind,” saidi DuPree, who was the 2011 Democratic nominee for governor.

Watson is a state senator from Hurley and Britton is a public service commissioner from Laurel.

“If you want a conservative candidate, I am that man,” Watson said.

Britton said that he, not Watson, was an early supporter of Donald Trump in the 2016 presidential campaign. Britton said as a utility regulator, he helped end an expensive project by Mississippi Power Co.

“I stood by the ratepayers. I said no to utility companies,” Britton said.