Privy to the details: Professor documents outhouses for survey 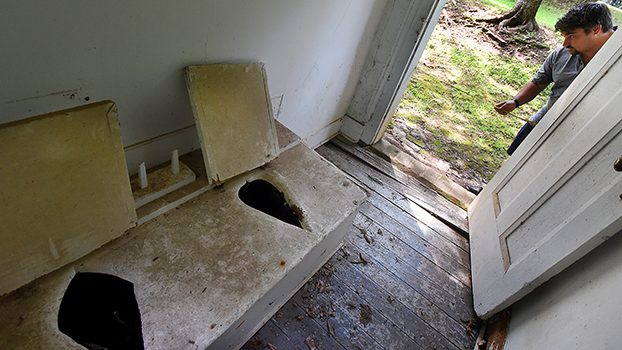 As tourists lined up Thursday to take pictures of the octagonal mansion Longwood, one particular visitor focused his attention on the small square privy out back.

A Texas A&M professor of architecture, Brent Fortenberry, spent most of the morning taking precise measurements of the five-seater outhouse, using a digital 3-D scanner, a drone and an old-fashioned tape measure.

The project is a joint effort of HNF, Mississippi Department of Archives and History and the Natchez National Historical Park, Burns said.

“We probably have the country’s richest resource of these buildings, both in the number of them and the variety of types of outbuildings,” Burns said. “Outbuildings just haven’t really been studied in-depth.”

Since the project began, Burns said HNF has identified approximately 235 structures in Adams County for the study.

For the next 10 days, Fortenberry will document only a fraction of the buildings that are on the list.

“This is a multi-year project,” Burns said. “(Fortenberry) will be back and forth to Natchez multiple times.”

Although the 144-square-foot brick privy is tiny compared to the main house at Longwood, it is no less important to historians, Fortenberry said.

“Privies and outbuildings, in general, provide us with an understanding of how sites like this were ensembles of buildings and how people moved through them,” Fortenberry said. “We can understand the relationships between masters and the enslaved. We can understand how hospitality spaces flowed and how people were positioning themselves in the 19th-century landscape.”

Burns said the information from the survey would be used for scholarly publications.

“We hope to have all of the documentation at the Historic American Building Survey and other databases so it will be widely available to scholars,” Burns said. “And we will probably have some kind of publication, eventually.”

Fortenberry said the documentation of the buildings is one-of-a-kind.

“In terms of understanding outbuildings within the 18th and 19th-century landscape in North America, this is probably the most important study that has been done since the agricultural building survey by the Colonial Williamsburg Foundation in the 1980s,” Fortenberry said.