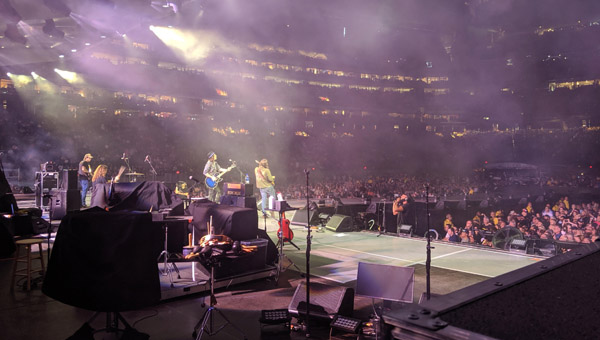 By TOM SCARBOROUGH
Special to The Natchez Democrat

It’s a long way from Natchez, Mississippi, to the biggest stage in rock ’n’ roll, but Natchez band Bishop Gunn made the big leap on July 27 at NRG Stadium in Houston, Texas, opening for rock legends The Rolling Stones.

Opening for such an iconic band can be a daunting prospect — the higher the band profile, the less patience the audience often has with the opening act, and no rock ’n’ roll band has a higher profile than The Rolling Stones.

If Bishop Gunn had any nervousness, the band members did not show it. The band roared out of the gate, opening with “Southern Discomfort,” the first song from their debut album, “Natchez.”

Over the next 40 minutes, Bishop Gunn executed a flawless set, their songs thundering through the vastness of the enclosed stadium. At the conclusion of the band’s final song, “Bank of the River,” the roar of the crowd made it clear that Bishop Gunn had earned a lot of new fans.

On several of the songs lead guitarist, Drew Smithers, played a 1957 Gibson Les Paul “Gold Top” that once belonged to the late Duane Allman, of the Allman Brothers Band.

The guitar has been housed at The Big House Museum in Macon, Georgia, and was brought to Houston especially for Smithers to play. Earlier in the day, however, the guitar had sold for $1 million at auction to an anonymous bidder. Smithers may be the last artist to have played it publicly.

“It’s such an incredible piece,” Smithers said. “It has an indescribable tone that just doesn’t seem to come out of any other guitar.”

Asked what he was feeling prior to the band taking the stage, lead singer, Travis McCready said, “I was thinking how my whole life of dreaming about making it in music had led up to this moment. But then I had this smirky thought, What’s the worst that can happen — I’m a steel fitter that somehow led a hockey player (Smithers) and an aviation student (drummer Burne Sharp) and a Marine (bassist Ben Lewis) to the biggest rock ’n’ roll stage on the planet. We were somewhere between ‘Rocky,’ and the ‘Bad News Bears.’”

“All day I had this sense of calmness,” Sharp said. “I just felt like the boys and I were going to crush the show. Not to mention the straight adrenaline that hit me right before we went on.”

Immediately after finishing their set, the band members met backstage for photos with The Rolling Stones lead vocalist, Mick Jagger, and the other Stones.

“Anyone who has seen our shows knows that I come off the stage soaked with sweat,” McCready said. “So when we were snapping pictures, Mick had his hand on my back. While he never broke pose, he said in a British accent, ‘You are wet!’ I said, ‘Sorry, Mick.’”