Wounded officer from Mississippi welcomed home from hospital as hero 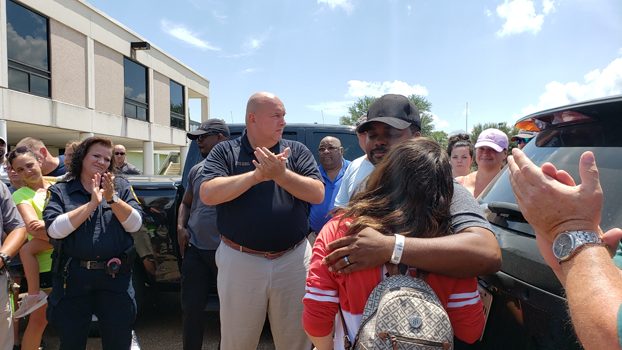 Walter Mackel stands next to his wife Pamala Mackel in red surrounded by Concordia Parish Deputies and representatives of several other law and emergency service agencies. (Sabrina Robertson, The Natchez Democrat)

Concordia Parish Deputy Walter Mackel, who was shot in the line of duty last week, received a warm welcome home Saturday afternoon after being discharged from University of Mississippi Medical Center in Jackson.

On July 25, Mackel was shot and while reportedly responding to an armed robbery call at an apartment complex on Carter Street in Vidalia.

Shooting suspect Kaleb Melton, 21, of Vidalia was later found dead inside an apartment while Mackel suffered a bullet wound that struck both his lung and kidney.

As law enforcement followed Mackel’s vehicle along U.S. 84, bystanders and cars lined the shoulders of the road and watched the police, fire, ambulance and sheriff’s vehicles pass through.

“It’s just overwhelming, the amount of prayers and support we’ve received from everywhere,” Mackel said. “I’m truly blessed being able to come home so early. I don’t know what else to say but thank you. Keep us in your prayers, and hopefully soon I will be back up 100% and back out there in the law enforcement community with everyone else.”

Mississippi man killed during cycling event when his bike…