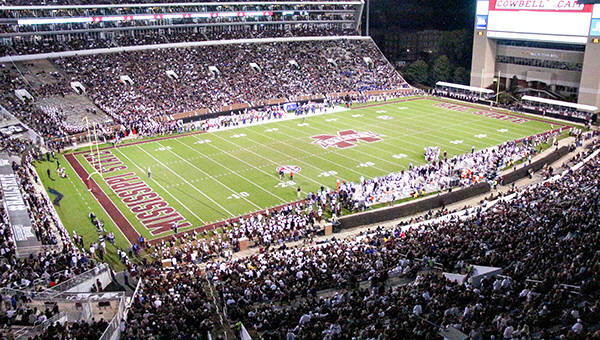 An old Southeastern Conference rivalry is moving to a new time slot next season.

Mississippi State and Alabama, who have traditionally played each other in late October or November since World War II, will play on Oct. 17 next season according to the 2020 SEC football schedule released Wednesday.

The matchup in Tuscaloosa will mark the earliest in the season the teams have played since 1942.

The date of the game has wandered around the calendar over the years, but has been played on Oct. 22 or later every year since 1948. The last time they played before that date was on Oct. 3, 1942.

Mississippi State will play four of its first five games next season at Davis Wade Stadium, including the first two SEC contests against Arkansas on Sept. 19 and Texas A&M on Oct. 3.

The lone road trip in that stretch is a non-conference game at North Carolina State on Sept. 12. The Bulldogs will play at Alabama and LSU in back-to-back weeks, and also travel to Kentucky on Nov. 14 and Ole Miss on Thanksgiving night.

While Mississippi State’s meeting with Alabama is moving up on the calendar, Ole Miss’ is sliding back. The Rebels will host Alabama on Oct. 3, the first time since 2011 that the game will be played in October.

Ole Miss will open the 2020 season against Baylor, in the eighth installment of the AdvoCare Texas Kickoff in Houston on Sept. 5. Two home games, against Southeast Missouri State and the SEC opener with Auburn, follow. The Rebels play at LSU on Sept. 26, 2020.

Other home games in the 2020 season include Florida, Middle Tennessee, Georgia Southern and Mississippi State. The Rebels will go on the road to play LSU, Vanderbilt, Texas A&M and Arkansas.

Other games of note on the 2020 SEC schedule include:

In another season opener, Alcorn State is at Auburn on Sept. 5.

It’s the first time since 1953 that Texas and LSU will play in Tiger Stadium. The first-half of their home-and-home series is this season on Sept. 7, which will also be LSU’s first visit to Austin since 1954.

• SEC powers Alabama and Georgia will meet Sept. 19 in Athens. They’ve met in each of the past two postseasons — Alabama beat the Bulldogs in the 2018 SEC championship game and the 2017 national championship game — but this will be their first regular-season meeting since 2015.

• Auburn and Georgia will play on Oct. 10. It’s the first time the Tigers and Bulldogs have played a regular season game outside of November since 1936

• LSU and Arkansas will play on Oct. 17, marking the first time the game has been played in October since Arkansas joined the SEC in 1992. The game has traditionally had a November date, and was often played as a rivalry matchup on Thanksgiving weekend.

• The annual LSU vs. Alabama rivalry game will remain on the first Saturday in November, on Nov. 7.

• LSU and Auburn, however, will play on Nov. 21 at Auburn. It will be the first time the Tigers and Tigers play in November since 1942. The 2001 meeting was postponed until Dec. 1 because of the 9/11 terrorist attacks.

• Week 12, on Nov. 21, will once again be the SEC’s unofficial late-season bye week. All 14 teams are in action, but only three head-to-head conference matchups are scheduled. The other eight teams will all play non-conference opponents from either the Group of 5 or Football Championship Subdivision.

• The Egg Bowl between Ole Miss and Mississippi State is scheduled for Thanksgiving night, Nov. 26 in Oxford.