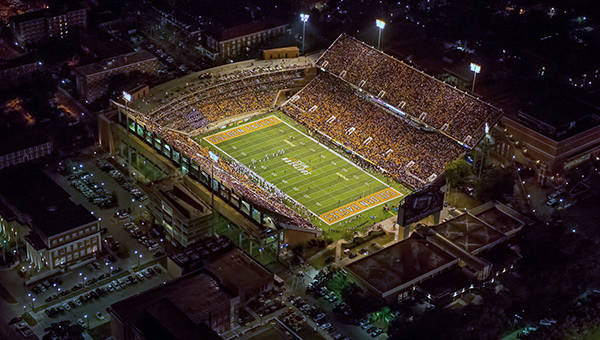 HATTIESBURG — Southern Miss is set to become the first Mississippi university to sell alcohol in its football stadium during games.

The school announced Monday that it would begin selling beer and light wine during home football games this season as part of a larger package of fan-friendly concession initiatives.

Alcohol sales at M.M. Roberts Stadium will begin with Southern Miss’ second home game, on Sept. 28 against UTEP. Southern Miss opens the 2019 season at home on Aug. 31 against Alcorn State, but the school said in a release that the delay is to train concession workers on proper policies and procedures.

“Concession workers and USM personnel will utilize the next month to ensure the proper training and infrastructure is in place to support a continued safe and enjoyable environment for fans,” the university said in a release.

Southern Miss will join about 60 other universities nationwide in selling beer and light wine at games, but will be the first in Mississippi. The Southeastern Conference earlier this year allowed its members to sell alcohol, but Ole Miss and Mississippi State have not announced any plans to do so.

In its release, Southern Miss said it has not yet decided whether to expand alcohol sales to other venues besides M.M. Roberts Stadium.

“Many universities who have previously implemented sales report decreases in alcohol-related incidents during games, including binge drinking and possession of alcohol by minors. Additional measures such as limits on the number of purchases per transaction will also be in place,” the university said in its release.

Beer and wine will be sold in eight locations around the stadium.

Among the safety procedures Southern Miss is putting in place are identification checks, limits on the number of drinks that can be sold in a single transaction, and a no re-entry policy. Once fans leave the game, they will not be allowed back into the stadium.

In addition, sales will be cut off at the end of the third quarter.

The university did not specify how many drinks fans can buy in one transaction.

Alcohol was the most noteworthy of several concessions-related announcements from Southern Miss. Beginning this season, students will be able to order food and drinks online from inside the stadium, and a “fan-friendly” value menu will be available as well.

Southern Miss students will be able to purchase food in the stadium through the Grubhub App with their Bonus Bucks, Dining Dollars, or a linked personal credit/debit card.

Students may order online and then pick up their concession items at the stand located under the East grandstands near the student section in an express pickup line.

Meanwhile, nine items including hot dogs, hamburgers, nachos, funnel cake and drinks will be available for $5 or less.

“These new initiatives allow us a great opportunity to continue to improve our game-day environment and provide a positive fan-friendly experience,” Southern Miss Director of Athletics Jeremy McClain said in a statement. “We are thankful for our partners across the University and in the community who helped make these amenities a reality.”