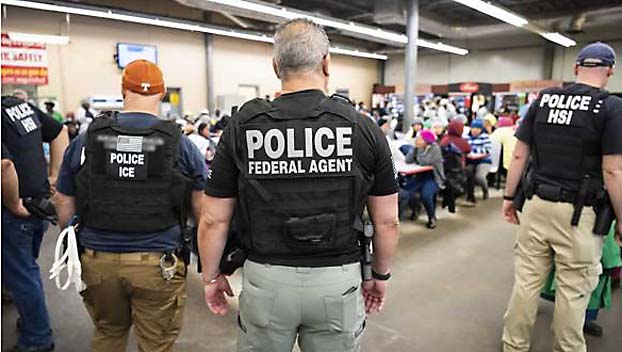 Federal agents inside one of the chicken processing facilities raided last week. Photo provided by Immigration and Customs Enforcement.

The reverend of a Mississippi church says raids by U.S. Immigrations and Customs Enforcement have decimated his congregation.

The Rev. Roberto Mena tells The Clarion Ledger that his Forest congregation and that of a sister church in Morton were halved by the Aug. 7 raids on Mississippi food processing plants. Mena says he and a majority of his parishioners at St. Michael’s Catholic Church are Guatemalan. Services offered in English, Spanish and Vietnamese.

Mena says some have been afraid to attend Mass since the raids. However, nearly 100 people packed into his small church last week to pray for the return of the absent parishioners.