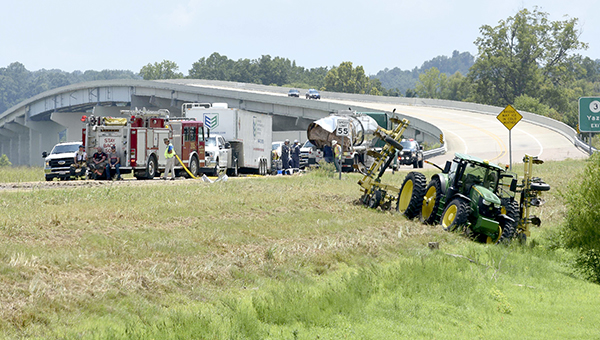 Emergency crews respond to the scene Wednesday, where a 18-wheeler hit a tractor causing chemicals to spill into the roadway closing U.S. Highway 61 North between Mississippi 465 and the Yazoo River Bridge. (Courtland Wells/The Vicksburg Post)

The wreck occurred about 11 a.m. Wednesday between Mississippi 465 and the Yazoo River bridge. No one was injured.

Warren County Fire Coordinator Jerry Briggs said the southbound 18-wheeler owned by Sindle Trucking of El Dorado, Ark., was carrying a “petroleum-based chemical.” When the vehicles collided, the collision created a large gash in the tanker, causing the chemical to spill on the highway.

Briggs said the chemical was more flammable than gas.

The spill forced authorities to shut down northbound and southbound traffic on U.S. 61 North, stop traffic on Mississippi 465 and evacuate an 1,000-foot radius around the spill. Students at nearby Redwood Elementary School, where emergency workers staged for the spill, were kept indoors.

Warren County Emergency Management Director John Elfer said the tanker was taking the petroleum-based chemical from Vertix Refinery in Columbus, Ohio, to Cam2 International in the Port of Vicksburg. He said a hazardous materials contractor used a vacuum truck to remove the remaining chemical from the tank and the truck was towed away.

Besides county fire units, Mississippi Highway Patrol, Mississippi Department of Transportation and Warren County Emergency Management have responded to the incident. Issaquena County officials assisted by diverting traffic heading south in the direction of the scene.

The Vicksburg Warren School District announced shortly after 1 p.m. that school bus routes that travel around the area of the spill would be delayed.

“We have learned that the cleanup of the spill on Highway 465 will likely cause delays for buses delivering students on the Eagle Lake route and on Floweree Road after school today,” the district said on Facebook. The post said using the alternate routes would cause the children to arrive home later than usual.