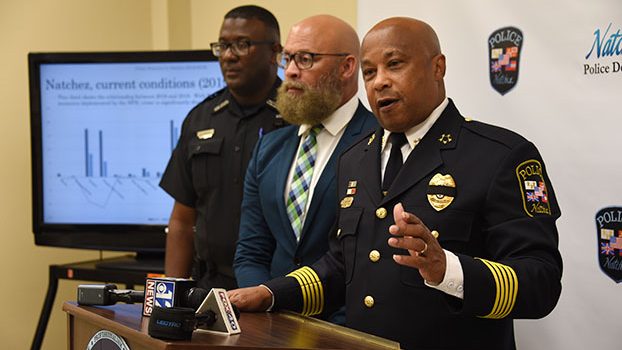 Natchez Police Chief Walter Armstrong hosted a press conference Wednesday to announce a significant drop in crime since the City of Natchez began installing crime cameras throughout the city.

There were at least 12 homicides reported in city limits, Armstrong said, adding only one homicide has been reported thus far in 2019.

Additionally, data provided by the Natchez Police Department shows a significant drop in other crimes, particularly in burglary, robbery and battery cases.

Armstrong said he also noticed a significant decrease in the number of calls received from places that were once considered high-crime areas.

“Not only has crime decreased, but criminal elements have moved on from those areas,” Armstrong said.

In December, officials announced Natchez would be participating in Project NOLA, a New Orleans nonprofit foundation that operates a crime camera program nationwide.

Armstrong said each of these cameras use WiFi, which allows them to transmit data to NPD and to Project NOLA’s National Real-Time Crime Information Center at the University of New Orleans.

As floodwaters recede, Amtrak train cutting through Mississippi can…