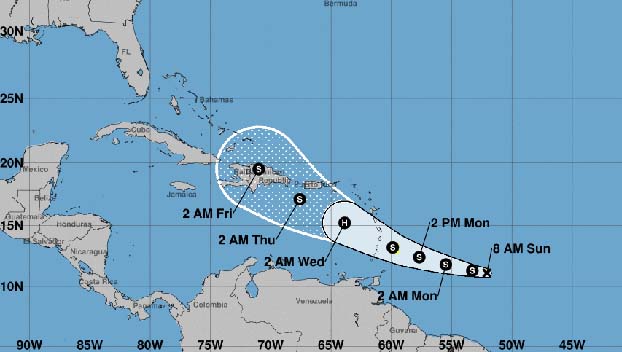 Why does the Atlantic hurricane season usually peak around this time?

Now that we are in late August, this is usually the time the Atlantic hurricane season begins to have some activity. Here’s a little video explaining why this time of year is usually the peak of activity.

As the Atlantic hurricane season enters a “tropical red zone,” a new tropical storm has formed east of the Lesser Antilles, and another depression or tropical storm may soon follow near Florida.

On Saturday afternoon, the system east of the Lesser Antilles was named Tropical Storm Dorian by the National Hurricane Center.

The area being monitored near Florida has been dubbed Invest 98L by the National Hurricane Center. The center of the disturbance was located over the warm waters of the Gulf Stream as of Saturday night.

This image shows both Invest 98L (just off the east coast of Florida) and Tropical Storm Dorian churning in the Atlantic Ocean. (NOAA)

“All interests along the southern Atlantic coast of the United States are encouraged to monitor the progression of 98L and what may become a tropical storm,” AccuWeather Hurricane Expert Dan Kottlowski said of the budding disturbance near Florida.

This satellite image from Saturday evening, Aug. 24, 2019, shows Tropical Storm Dorian tracking through the open waters of the Atlantic. Dorian is expected to track towards the Lesser Antilles by midweek. (NOAA)

“98L is moving into an area conducive for development into a tropical depression or storm as it is in an area with warm water and relatively low vertical wind shear,” AccuWeather Senior Meteorologist Dan Pydynowski said.

It is possible that quick organization and strengthening takes place over the warm waters of the Gulf Stream.

As the feature begins to agitate the ocean, moderate to strong rip currents can develop.

“An uptick in winds and building seas and surf are likely along the Carolina coast to New Jersey during this period, even if the center of the storm remains offshore,” according to AccuWeather Senior Meteorologist Brett Anderson.

“There is the risk of coastal flooding and minor beach erosion, especially at times of high tide,” Anderson said.

An area of high pressure over the interior Northeast will assist with enhancing the onshore breeze along the mid-Atlantic coast.

Since a front and moisture will remain stalled over the southeastern United States into early week, areas of torrential downpours and flooding can occur even with the system remaining at sea.

At this time, steering winds are likely to keep the center of the storm off the Carolina coast and the mid-Atlantic region as well next week.

However, this track may change.

The exact track over the western Atlantic will be dependent on how quickly the tropical feature strengthens, as well as the position of high pressure in the Northeast and an approaching cool front in the Midwest this week.

At this time, there is a greater chance of a track back toward the coast from Nova Scotia to Newfoundland, Canada, rather than the mid-Atlantic or New England at the end of the week.

A tropical wave to the east of the Lesser Antilles that AccuWeather meteorologists have been monitoring for possible development over the past few days became Tropical Depression 5 on Saturday morning. By Saturday afternoon, it was named Tropical Storm Dorian.

The feature is expected to reach the Windward Islands around Tuesday or Wednesday.

This satellite image shows Tropical Depression Five to the east-southeast of the Lesser Antilles on Saturday morning, Aug. 24, 2019. (NOAA)

It is possible that this feature may be a strong tropical storm or perhaps even a hurricane at this point, depending on how much wind shear it encounters.

All interests from Cuba to Hispaniola and Puerto Rico should closely monitor the path of this feature as it crosses the Lesser Antilles and eventually reaches the eastern Caribbean.

Elsewhere over the Atlantic Basin, Chantal, which was once a tropical storm, has dissipated.

As additional tropical waves emerge from Africa, there will be an ongoing risk of development as wind shear, dry air and dust diminish over the Atlantic Basin in the coming weeks.

This is the time of the year when development can occur just about anywhere over the Atlantic, which means well at sea or near the coast of North America.

People should not expect the quietness of June, July and the first part of August to be a reflection on what the balance of the Atlantic hurricane season will bring.

AccuWeather meteorologists anticipate that multiple tropical storms and/or hurricanes to be in progress at the same time in the coming weeks.