20,000 AT&T technicians walk off job including many in Mississippi 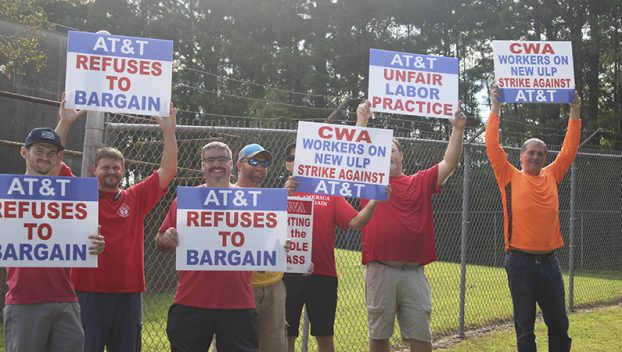 AT&T workers across the southeast, including many in Mississippi, went on strike over the weekend.

The approximately 20,000 workers are represented by the Communication Workers of America (CWA) labor union.

The workers are currently bargaining for a new contract with AT&T, Posey said. The union has filed labor charges with the labor board because AT&T did not have anyone at the bargaining table who could make decisions in the contract negotiations, Posey said.

The employees on strike work on the utility side, which includes putting up new phone lines, making repairs at customer homes and performing installations, Posey said.

“We just ask that the customers realize that this is nothing against the customers,” Posey said. “We want AT&T to treat the workers fairly so that we can provide the customers with the excellent service that the technicians provide every day.”

In an emailed statement, AT&T spokesperson Jim Kimberly said the company believes a strike is not in anyone’s best interest.

“We’re baffled as to why union leadership would call one when we’re offering terms that would help our employees – some of whom average from $121,000 to $134,000 in total compensation – be even better off,” Kimberly said in an emailed statement.

“We have offered the union terms that are consistent with what other CWA-represented employees have approved in recent contract negotiations; the company has reached 20 fair agreements since 2017 covering more than 89,000 employees. The Southeast contract covers fewer than 8 percent of our employees,” Kimberly said in an emailed statement.

“We entered these negotiations prepared to bargain in good faith with AT&T to address our members’ concerns and to work together to find solutions,” said CWA District 3 Vice President Richard Honeycutt. “Our talks have stalled because it has become clear that AT&T has not sent negotiators who have the power to make decisions so we can move forward toward a new contract.”