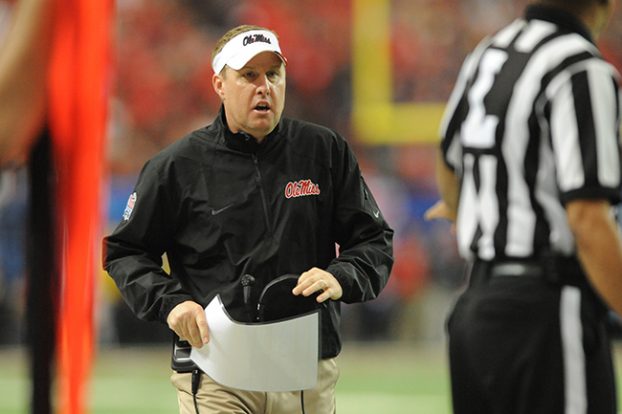 New Liberty coach Hugh Freeze still doesn’t know if he will be on the sidelines for his debut with the Flames against No. 22 Syracuse Saturday night.

Right now, he’s not even on the field. He is helping to run practices from a hotel room.

Freeze had back surgery on Aug. 16 and has been staying in a hotel near campus because he’s not allowed to climb steps, including at his home. The school’s IT department set him up with video monitors from numerous camera angles that enable him to watch practice from his room. He’s also able to speak with coaches and players during the practices via an audio hook-up and has even called plays to be run during some of the workouts.

The experience has been odd, he said, and doctors still haven’t determined if Freeze can be on the field or if he would be wiser to be in the coaches’ box — which would be a first for Freeze.

“It certainly will be different if I can’t see them eye-to-eye, particularly when adversity comes and I want to have a word with them about it and talk to them about not blinking and playing the next play,” Freeze said Monday, speaking from a wheelchair at his first weekly news conference.

“It’s game week,” he said. “Everybody’s ready except for maybe me.”

Freeze’s issues began when he started experiencing back pain on Aug. 10, and he missed practice the following day after the pain got worse. Four days later, he was taken to University of Virginia Medical Center for additional tests, and he had surgery the next day. During the procedure, doctors also discovered he had a staph infection.

Since returning to Lynchburg five days ago, Freeze has been staying in a hotel near campus.

The complications from the surgery and infection caused him to miss nearly two weeks of practice.

“The hardest thing is just walking with the muscles being tight in the lower back,” said Freeze, adding he’s trying to stay off his feet.

“He’s not here, but he’s literally at practice either with a walkie-talkie, phone or live cameras,” he said.

Freeze, who was fired at Ole Miss just before preseason practice in 2017 when school officials found a “pattern of personal misconduct” that started with an investigation into a one-minute call to an escort service, is preparing for a game for the first time since he was let go. It’s an emotional time, though the coach said, “I think it would be a lot different if I was healthy and running around.”

Freeze made a surprise appearance at practice last Friday, being driven onto the field on a golf cart as the team cheered. He spoke with them briefly, then got more cheers when he told them to take the rest of the day off.

“I’m just anxious about seeing our team compete,” Freeze said. “Obviously I wish things were a little bit different for me, but I think that our staff and our kids have been remarkable in how they’ve handled it.”

The latest: More details on violations that led NCAA…