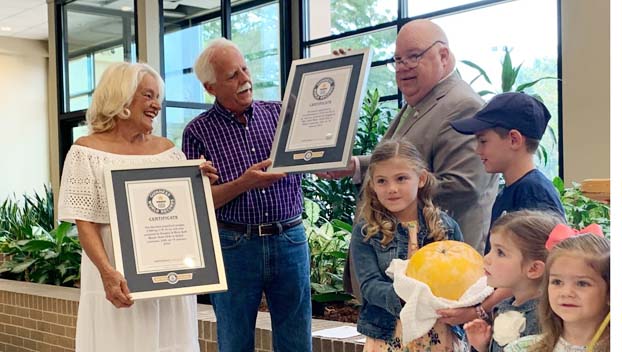 A basketball-sized grapefruit has brought two world records to a Louisiana couple.

The giant citrus grew in the yard of Mary Beth and Doug Meyer of Slidell.

The Guinness Book of World Records says it’s the world’s heaviest and largest in circumference.

It weighed 7 pounds, 14.6 ounces and measured 28.75 inches around. That’s almost as big around as an NBA basketball.

The grapefruit was 13.6 ounces heavier and 1.25 inches bigger around than the 2006 record, set in Brazil.

State Agriculture and Forestry Commissioner Mike Strain presented a Guinness certificate to the couple Tuesday in Baton Rouge. His department provided the equipment for the official weighing and measuring in January.

“My grandchildren created a fairy garden at the base of the tree. One day, my grandson noticed the oversized grapefruit growing. At that point, we really started paying attention and monitoring its development,” said Doug Meyer. “This experience will always be a special memory for us and our grandchildren.”

“It’s not every day you get to present someone with a world record title,” said Strain. “LDAF employees were able to provide the official equipment to document this wonderful Louisiana grown grapefruit. We congratulate the Meyer’s for their achievement and especially for getting the grandkids involved and teaching them how to garden!”

From staff and Associate Press reports