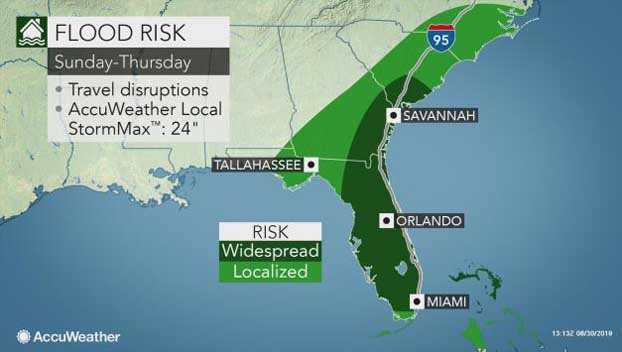 As the exact track of Hurricane Dorian is becoming more certain, with a strike along the central Florida Atlantic coast the most probable outcome, the tropical cyclone is likely to unleash torrential rain and raise the risk of flooding after landfall next week.

Following major impact to lives and property due to high winds and coastal flooding, heavy rain and inland flooding may be Dorian’s second wind over the southeastern United States.

There are a few weather features that will affect the track of Dorian and the amount of rainfall that is released as it moves along through next week.

The first is a relatively common area of high pressure over the west-central Atlantic. A clockwise flow around this high is, in part, directing Dorian on its current northwest path.

A second feature is a large storm in the middle layer of the atmosphere over the Caribbean that is not so common. The counter-clockwise flow around this storm is also pushing Dorian to the northwest.

However, as Dorian continues to move along, the influence on the high pressure area may diminish, while the winds around the upper-level storm are forecast to become more east to west and then direct Dorian on a more westerly track toward Florida.

The third player is a non-tropical storm that will progress eastward from the Midwest to the Northeastern U.S. next week. The speed of this system may be critical for eventually turning Dorian to the north.

“How soon that non-tropical storm pulls Dorian northward will determine whether or not Dorian indeed makes landfall in Florida or turns northward toward the Carolinas at the last minute,” according to AccuWeather Lead Long-Range Meteorologist Paul Pastelok.

AccuWeather meteorologists are projecting Dorian to make landfall as a major hurricane with the intensity of a Category 4 and maximum sustained winds of 130 mph or greater along the middle of Florida’s east coast.

Along the Florida coast, near and north of the eye, widespread power outages and coastal flooding are anticipated. Property damage may be dependent on the quality of the construction of buildings in the region, which is more stringent in Florida, when compared to other areas.

After making landfall in Florida, a gradual curved path to the north and northeast is anticipated with heavy and excessive rainfall along the way.

A track that takes the storm over enough of the Gulf of Mexico to allow for substantial restrengthening no longer appears likely.

Emergency managers and government officials should plan ahead for the secondary phase of Dorian’s legacy.

Due to the slow-forward speed of the storm after landfall, prolonged tropical downpours will be unleashed that will lead to substantial urban and low-lying area flooding over interior Florida initially during Sunday night to Tuesday.

Rainfall over much the central and northern part of the Florida Peninsula is expected to range between 8 and 16 inches with an AccuWeather Local StormMax™ of 24 inches.

The nature of the rain and flooding is likely to change as the storm, still loaded with moisture, slowly weakens over the Southeast during the middle to latter days of the first week of September.

Over the Southeast states, the terrain changes from being relatively flat with a sandy soil over the Florida Peninsula to hilly with clay and loam over interior Georgia and the Carolinas.

As heavy rainfall from the storm moves inland, the terrain and soils can lead to more problems with stream and river flooding, while urban flooding issues continue.

Soil conditions ranging from normal to moderate drought could easily become saturated in some areas and lead to significant runoff.

“Should Dorian stall around Florida and not get picked up by the storm moving in from the Midwest, less rain may fall over the Carolinas, but even more rain could fall on the Florida Peninsula,” Pastelok said.

In this scenario, hurricane and/or tropical storm conditions may last much longer at any one given location.

Recall that Hurricane Harvey in August 2017 stalled for days over southeastern Texas and unloaded several feet of rain on the region. In 2018, Hurricane Florence stalled and produced devastating flooding over the Carolinas.

At this time, the most likely scenario is for Dorian to be picked up by the non-tropical storm sweeping across the Midwest next week.

That Midwest storm should draw Dorian and its rain northeastward along the Atlantic seaboard during the next Thursday to Saturday period.

Heavy rain and disruptions to outdoor plans could occur in the mid-Atlantic region by next weekend.

It is conceivable, depending on how close to the Atlantic the storm tracks, it may remain as a tropical storm or depression until eventually reaching the cold waters of the North Atlantic, where it could merge with a non-tropical storm.

If Dorian were to stay relatively close to the coast while heading northeastward next week, rough surf, coastal flooding and locally damaging wind may conceivably spread northward along the Georgia, Carolina, Virginia, Maryland, Delaware and southern New Jersey coasts as well.

Should Dorian venture well inland over the Southeast or possibly stall over the Florida Peninsula, transition to a tropical rainstorm with little wind would occur.