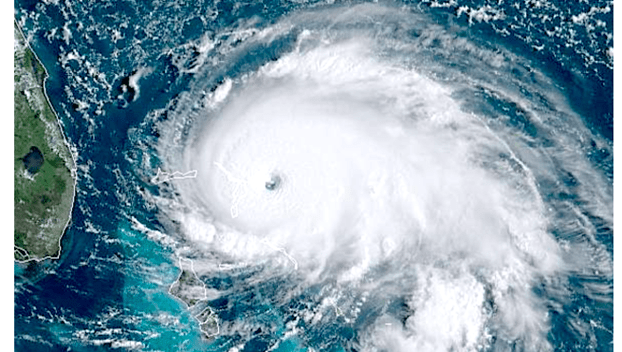 Hurricane Dorian is whipping up waves and strong winds as it approaches the Bahamas. This video was shot on Sunday, Sept. 1 from Marsh Harbour on the Abaco Islands.

Dorian strengthened into a catastrophic Category 5 hurricane as the eyewall approached the Bahamas early Sunday. President Trump warns it could be among ‘strongest’ to hit in decades.

“Dorian has become the strongest hurricane in modern records for the northwestern Bahamas,” the National Hurricane Center said on Sunday morning.

As of Sunday morning, Dorian was located about 20 miles east of Great Abaco island in the Bahamas. The powerful Category 5 hurricane was packing winds of 180-mph with higher gusts reaching 220-mph.

Since 1851 the Treasure Cay area in the Abacos Bahamas has experienced three major hurricanes, all of which were Category 3 hurricanes, according to the NWS Charleston. Dorian, currently a Category 5, would be the strongest by far to affect the area. Hurricane Andrew in 1992 is the only Category 5 hurricane to pass through the Bahamas.

“Dorian is expected to slow down its forward progression today and on Labor Day, which will lead to an extended period of time where hurricane conditions could be possible across the northern Bahamas,” Buckingham said.

Due to the slow speed of Dorian, portions of Great Abaco Island and Grand Bahama Island may have to deal with hurricane conditions in excess of 24 continuous hours.