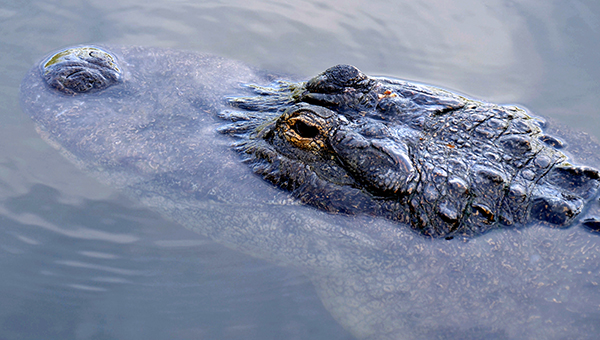 Alligator is a large crocodile in the water. Alligator close up portrait. Alligators in a swamp in Florida. Close-up of the head of a alligator, Florida.

Soon after alligator season opened at noon on Friday with favorable conditions, two hunters caught a giant that could break a state record.

The Clarion Ledger reports that Derrick Saucier of Pascagoula and Jarrod Davis of Hurley were making passes of Mary Walker Bayou in Gautier when they spotted the large gator.

Saucier said it was minutes before noon and he felt like a kid on Christmas Eve waiting for the season to start.

A few minutes later the pair had hooked the 13-foot, 6-inch alligator and then spent 90 minutes battling it.

They struggled to get the animal into their boat and had to tow it to the shallow water of a nearby boat launch.

The alligator’s measurements indicate that it could near the state record for heaviest male alligator taken in public waters.