Geography lesson: Alabama borders Mississippi and is not in line for Hurricane Dorian damage 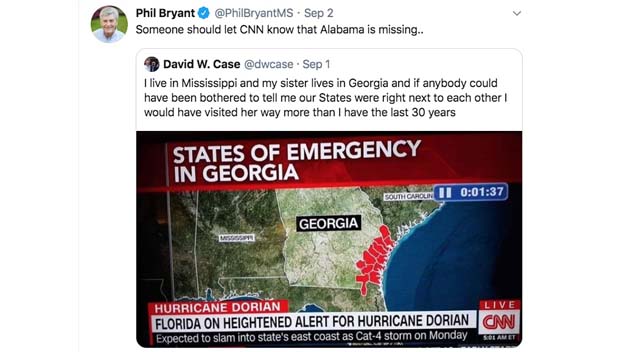 Over the weekend the need for an increased focus on U.S. geography became painfully clear in discussions over Hurricane Dorian — and Democrats and Republicans alike were up in arms.

The same TV network made fun of President Donald Trump’s obviously wrong statement earlier in the weekend that the state of Alabama would “most likely be hit (much) harder than anticipated.”

In reaction, the Birmingham, Alabama, office of the National Weather Service took to Twitter to correct the president.

“Alabama will NOT see any impacts from #Dorian. We repeat, no impacts from Hurricane #Dorian will be felt across Alabama. The system will remain too far east. #alwx.”

Social media users were critical of the president for not issuing correct facts regarding Alabama and the hurricane and critical of CNN for completely missing the very existence of the State of Alabama.

In the end, however, mistakes can happen regardless of political affiliation.