Intruder charged with shooting homeowner in chest during ‘targeted’ attack gets $150,000 bond 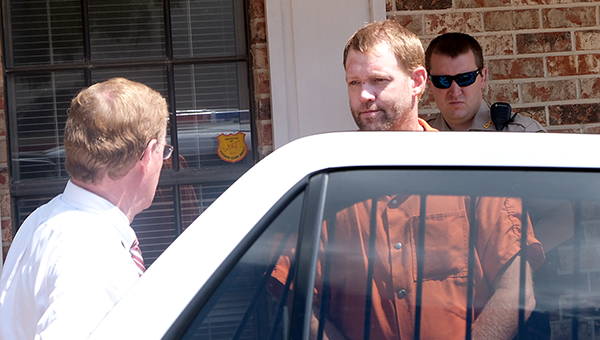 Dale Armstrong, 40, of Pearl, is placed in a Warren County Sheriff’s Office car Tuesday following his initial court appearance. Armstrong has been charged with the shooting of a Warren County man Monday morning. (Courtland Wells | The Vicksburg Post)

A day after reportedly breaking into a Warren County home and shooting a man in what authorities believe was a targeted attack, Dale Armstrong, 40, of Pearl, made his initial court appearance.

Justice Court Judge James Jefferson Tuesday set a $150,000 bond for Armstrong after charges of shooting into an occupied dwelling and aggravated assault were filed.

He is currently being held in the Warren County Jail.

Armstrong is connected to an incident Monday that left a 49-year-old male victim with a gunshot wound to the chest. Warren County Sheriff Martin Pace said Monday evening Armstrong and the victim reportedly had a history, which led officials to believe the attack was not random.

“At no time were residents in the area in any immediate danger,” Pace said Monday evening. “We believe this was a targeted incident.”

Pace said multiple agencies were involved in the investigation and search for Armstrong, who turned himself in to authorities with the Brandon Police Department Monday evening.

Shortly before 7 a.m. Monday, deputies with the Warren County Sheriff’s Office were dispatched to the 200 block of West Drive, where they found the victim suffering from the gunshot wound.

Pace said the victim was conscious and talking when deputies arrived. He was later taken by ambulance to the parking lot at South Park Elementary School, where he was then flown by AirCare to a Jackson hospital.

During the course of the investigation, Pace said witnesses saw a newer model Kia SUV leaving the scene.

Pace said evidence indicted Armstrong forced entry into the victim’s home, where he shot the victim.

Pace said Tuesday the investigation was ongoing and additional charges were possible.

“We have investigators back in Rankin County today, conducting interviews there, and we are continuing to carry through the investigation,” Pace said.