It may be football season, but blistering heat will make it feel like middle of summer across South 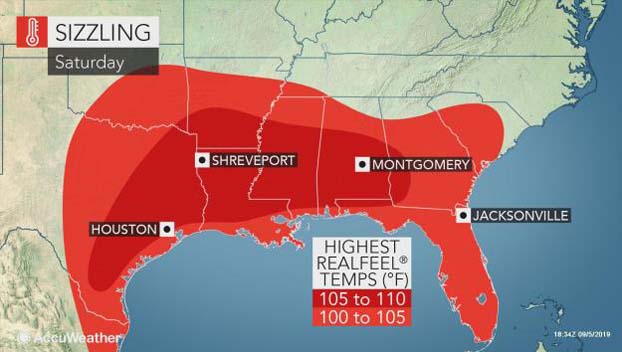 Record-challenging heat will make it feel like the middle of summer across the southern United States through the weekend.

Dry conditions and plenty of sunshine will stretch from eastern Texas to Georgia on Friday as an area of high pressure settles over the region.

Temperatures across much of this area will climb into the middle to upper 90s F, while farther west in Louisiana and eastern Texas, highs are expected to peak near 100 F.

“In fact, record highs may be challenged in several locations, such as Dallas, Houston and Shreveport, Louisiana, just to name a few,” AccuWeather Meteorologist Ryan Adamson said.

Sweltering heat will spread farther north across the Southeast by Saturday in the wake of Hurricane Dorian moving away from the mid-Atlantic coast.

Heat will peak in most places on Saturday with high temperatures ranging from the middle 90s along the Southeast coast to the lower 100s in eastern Texas.

Normal highs for the beginning of September across this region range from the middle 80s to lowers 90s.

It will feel even hotter across the region as AccuWeather RealFeel® Temperatures reach above 100 F. It may even feel as hot as 110 F away from the coast.

Several record highs were tied or broken across the south on Thursday. In Vero Beach, Florida, which had been at risk from impacts from Dorian earlier in the week, the high temperature of 97 broke the old Sept. 5 record of 96 set back in 1996. New Orleans tied its record of 97; the last time the city hit 97 on Sept. 5 was in 2000.

Those along the Southeast coast left without power in the wake of Dorian will need to take extra precautions, such as drinking plenty of water to stay hydrated and taking frequent breaks in the shade during strenuous activity.

While Sunday will still be hot, the arrival of some spotty showers and thunderstorms can help to keep temperatures a couple of degrees lower from eastern North Carolina to the panhandle of Florida.

Temperatures will remain on the higher side into the beginning of next week, but more widespread showers and thunderstorms will knock temperatures down by a couple degrees in most locations.

“Temperatures should fall below 100 degrees in most areas by Sunday and Monday,” added Adamson, “but it will still likely be above normal for early September, with widespread mid-90s.”