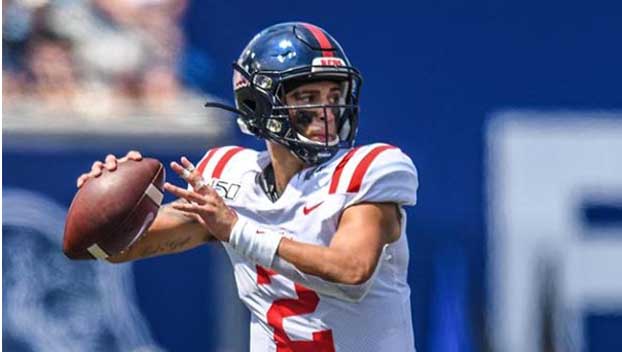 There’s usually no shortage of drama when Mississippi meets Arkansas on the football field.

The last four games between these Southeastern Conference Western Division foes have been decided by a combined 10 points.

From former Razorback tight end Hunter Henry’s lateral to convert a 4th-and-25 in a 2015 overtime win to Ole Miss’ game-winning 97-yard drive in Little Rock last season, these two foes have produced some compelling contests. They meet again Saturday at Ole Miss in the SEC opener for both teams.

“It’s huge,” Rebels head coach Matt Luke said. “It’s important because it’s at home and an SEC game. It’s a big game for us. We’ll continue to build defensively, and we’ll work hard to get some of these guys to play better offensively.”

Neither team was particularly thrilled with its season-opening performance last week.

Ole Miss lost 15-10 at Memphis in its season opener while Arkansas escaped with a 20-13 home win over Football Championship Subdivision program Portland State.

Ole Miss wants to see improvement on offenses after it had trouble moving the ball against Memphis, particularly in the first half. The offensive line was manhandled by Memphis’ defensive front seven.

Arkansas is hoping Rakeem Boyd builds on his momentum after rushing for 114 yards and a touchdown on 18 carries against Portland State. The Razorbacks also want to get more production from their passing game.

Some other things to watch when Ole Miss hosts Arkansas.

Both programs were picked to finish at the bottom of the SEC West by most preseason predictions, meaning conference victories could be hard to acquire. This game is a prime opportunity for both schools to secure an SEC win.

“For a young team, this one is going to be a four-quarter battle,” Luke said. “We’ll have to go win it in the fourth quarter, and it will be huge to have a home-field advantage.”

Luke and Morris struggled last year in their first full season as SEC head coaches. The Rebels went 1-7 in SEC competition and their lone win was against Arkansas. The Razorbacks failed to win a conference game.

“We are excited about this opportunity ahead of us,” Morris said. “They will be much improved from week one to week two, just like we will. It is a huge challenge ahead of us.”

Hicks, who played for Morris for two seasons at SMU before transferring, started and went 14-of-29 for 143 yards. Texas A&M transfer Nick Starkel went 4-of-5 for 80 yards and an interception.

Ole Miss is doing everything it can to assure its blocking woes don’t continue.

Luke declared this week that he would use more offensive linemen against Arkansas after six played against Memphis. He guaranteed freshman left tackle Nick Broeker would see action this week.

“We have some young guys, and we’re going to get them better. There were some mistakes made, but we can put them in a little bit better position too,” Luke said. “We’re going to play a few more guys, in particular Nick Broeker. He’ll see some playing time this week. We can get better on that side of the ball in a hurry.”