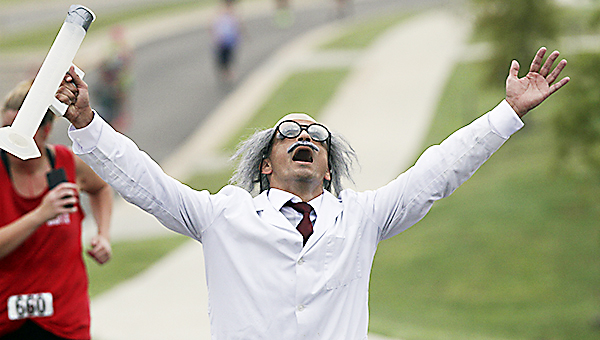 Nestor Raul Anzola gestures as he reaches the halfway mark during the U.S. Army Corps of Engineers Research and Development Center (ERDC) Mad Scientist 5K in 2018. This year’s race is scheduled for Saturday morning at the ERDC campus on Halls Ferry Road. (Courtland Wells/The Vicksburg Post)

One of the most recent additions to Vicksburg’s running calendar is also going to be the hottest event of the year.

The Mad Scientist 5K run, race walk and fun run is scheduled for Saturday at 8 a.m. at the U.S. Army Corps of Engineers’ Engineer Research and Development Center. High temperatures Saturday are forecast to be close to 100 degrees, but race director Steve Pranger hopes the early start and some extra precautions will make things more comfortable for runners and walkers.

“We know we’re not going to have any rain. So that’s good,” Pranger deadpanned. “We’re going to have two extra water stops on the course and more water available at the finish line. We’ll also have an ambulance from the Vicksburg Fire Department on station if anyone needs it. Race time is 8 o’clock, so hopefully it’ll still be in the 80s then.”

Approximately 200 people have pre-registered for the Mad Scientist 5K, which is celebrating its third year. It was started as a way to showcase the ERDC facilities to the general public, Pranger said, and has developed into a light-hearted event for a good cause. Last year, several runners dressed up in costumes for the run.

“Our colonel at the time (Col. Bryan Green) wanted to open ERDC and give the public a chance to see the place. Someone suggested we do a run and it’s taken off. All of our proceeds go to give scholarships to local students,” Pranger said.

Runners and walkers should enter the facility at the main gate on Halls Ferry Road, and Pranger encouraged all participants to arrive a little early.

Several streets on the ERDC campus will be closed off beginning at 7:45 a.m. so they can be cleared in time for the race. Because of that, Pranger said, late arrivals might have trouble finding a place to park or getting to the starting line on time.

Report: Mississippi ranks at top of list no one…