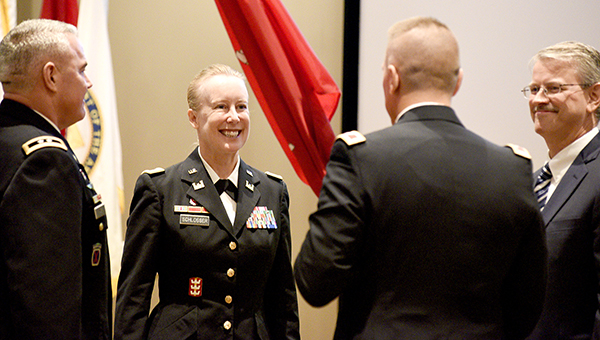 History was made Friday at the U.S. Army Engineer Research and Development Center with the installation of ERDC’s 11th and first female commander, Col. Teresa Schlosser, during a change of command ceremony.

Schlosser replaces Col. Ivan Beckman, who is retiring from the Army after 30 years and pursuing a Ph.D. in mechanical engineering from Mississippi State University.

Maj. Gen. Richard Kaiser, former commander of the Corps’ Mississippi Valley Division and deputy chief of engineers and deputy commanding general for the Corps, told Beckman, “You were the right commander for ERDC at the right time. What a great opportunity you had. Your leadership has been tremendous.”

In Schlosser, Kaiser said ERDC was getting a strong leader.

Referring to her last command as district engineer for the Corps’ Far East District, Kaiser said she was responsible for overseeing a $10 billion construction project.

Kaiser said Schlosser was the best choice as ERDC’s next commanding officer.

“You are bringing on an excellent commander, and I guarantee this — Teresa will do everything she can to provide excellent leadership that you deserve and allow the director to focus his efforts on where they need to be,” he said. “And because of that, this organization will continue to do wonderful things for this nation and the U.S. Army Corps of Engineers.”

The more she learns about ERDC, she said, “The more I am amazed. You just do so much, and it is my honor to be a part of this organization.”

After the ceremony, Schlosser said she was excited to be taking command of ERDC. And while she believes there is some pressure being the center’s first female commander.

Schlosser wants to keep ERDC’s involvement in the Vicksburg Warren School District science, technology, engineering and math programs, and hopes she can serve as a role model for girls to get involved in STEM.

“To be one, you’ve got to see one,” she said. “If little girls get to see a female senior engineer, they can look up and say, ‘I get to do that.’” She also wants to improve base infrastructure.

She said has worked with ERDC in the past with disaster response for a tsunami in Thailand, a typhoon in the Philippines, and for Hurricane Katrina in the area between Biloxi and Louisiana coast.

“We called back to ERDC when I had structural questions or questions I couldn’t answer in the field, so I had the exposure,” she said.

Schlosser shares something with Beckman and former ERDC commander Col. Bryan Green — all three served engineering assignments in Korea before coming to ERDC.

“I think it’s a bit coincidental,” she said of the similarity, adding, “Part of it, though, is Korea is the only 06 (colonel level) command in the Corps that is staffed (for) two years. Other district commands are three years, and so we come out of command a little early, so we have the opportunity to command again.”

“They have challenges there that ERDC is already helping with,” she said.

Schlosser said she was somewhat surprised to be offered the command.

“Last spring, I got the call and asked if I was interested in coming to ERDC when I left Korea. I came to visit ERDC and said, ‘Oh, yeah!’ and I jumped at the chance.”