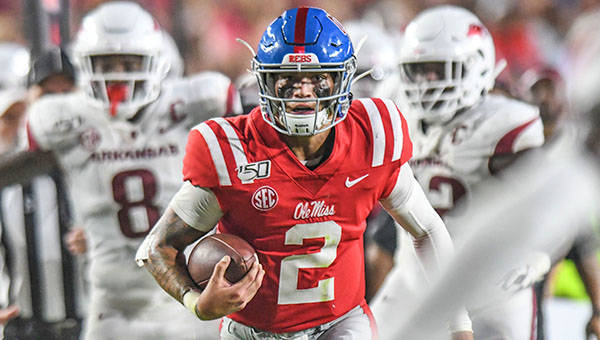 OXFORD (AP) — Matt Corral threw for 246 yards, including a pair of touchdown passes to Elijah Moore, and Ole Miss defeated Arkansas 31-17 on Saturday to win its Southeastern Conference opener for the first time since 2015.

Scottie Phillips added scoring runs of 1 and 26 yards and finished with a game-high 143 yards rushing. Corral added 46 rushing yards. and Snoop Conner had 42.

The offensive production was a marked difference from a week ago, when the Rebels had 173 total yards in a 15-10 loss to Memphis.

The defense had 13 tackles for loss, including three sacks, led by Jacquez Jones with 13 tackles.

Arkansas (1-1, 1-0) stayed within striking distance at 17-10 in the third quarter on a 69-yard fumble return for a touchdown from Kamren Curl. Quarterback Nick Starkel, who replaced Ben Hicks in the second half, had a 6-yard touchdown pass to Koilan Jackson in the final two minutes.

Rakeem Boyd led Arkansas with 67 rushing yards on 17 carries. As a team, the Razorbacks finished with 61 yards.

Starkel was 17-of-24 passing for 201 yards, with one touchdown and one interception.

“We really were concentrating on stopping the run,” Ole Miss defensive coordinator Mike MacIntyre said. “Boyd’s a really excellent runner and we really never let him get started.”