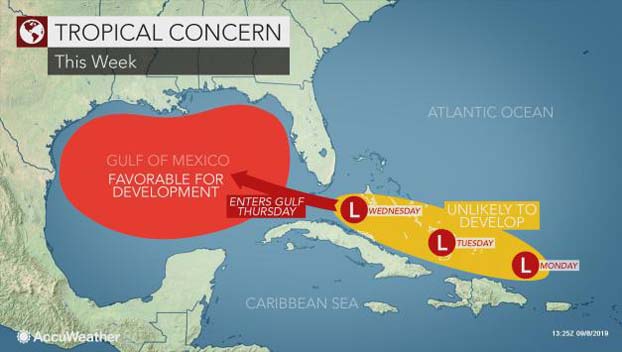 Behind Dorian, AccuWeather meteorologists are keeping a close eye on a few areas of disturbed weather in the Atlantic basin this week.

One area of disturbed weather is a tropical wave that pushed off the western shores of Africa last week. As of Sunday morning, it was located several hundred miles west of the Cabo Verde Islands.

While the showers and thunderstorms associated with this wave were looking disorganized on Sunday, there is a 30% chance that this system gradually strengthens while tracking westward through the central tropical Atlantic Ocean this week.

“Another wave is expected to move off the coast of Africa through Monday and will bear watching for tropical development later this week,” AccuWeather Senior Meteorologist Adam Douty said.

With wind shear not looking to be an issue and dry air dissipating as these waves move westward, tropical development of one or both of these waves is possible.

All interests across the Lesser Antilles and northern Caribbean should closely monitor the path of these waves as they traverse the open water this week. Possible impacts to these areas would occur around the middle of September.

The next names on the list for the 2019 Atlantic hurricane season are Humberto and Imelda.

These tropical waves are not alone out in the Atlantic Ocean. In fact, there is one being monitored closer to the United States.

“A disturbance will pass to the north of the eastern Caribbean and into the Bahamas early this week,” Douty said. “It will have to be monitored as it tracks generally to the west to west-northwest.”

Regardless of whether or not this disturbance organizes into a tropical system, Douty expects it to enhance rainfall across Florida late this week. The northern Bahamas, which suffered a devastating blow from Dorian, may also experience an uptick in wet weather.

Scorching heat this week across South may challenge weather…