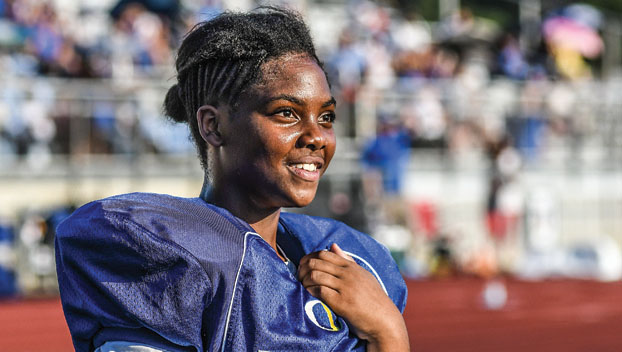 Aniah Echols walks gingerly, shading her eyes with her right hand as she treads through the boys locker room at Oxford Middle School looking for her coach.

Just a seventh grader, Echols doesn’t really know any different. But in a way, she’s forced herself to do a lot of growing up quickly in the past handful of months.

Echols is the first female football player to ever suit up for the Oxford Chargers in a game. OMS head coach Mike Hardwick says he’s had other girls come out, but they never lasted even until fall practice, let alone a game. Now, Echols is starting at right tackle for a Charger middle school team that is 2-0 on the season.

“It’s a sport that I grew up playing since I was like four or five, but I was never really accepted on the school team. So, I would just play with my brother and my cousins,” Echols said. “I think it’s pretty cool that they allow me as a girl and (person of) my color to play. At my other school they were like, ‘Heck no.’”

She moved to Oxford from Holcomb, Miss. in 2015. This is her first year playing official, organized football, and Hardwick already describes her as “perhaps our best lineman.”

A blackbelt and gold medalist in taekwondo, Echols isn’t foreign to the relatively violent nature of football. She hates the word fragile, but she admits she was really nervous at first, practicing with the team and in games. What helped her get over the nerves? The first time she made a big hit.

Echols’ mother said she wasn’t surprised at all when her daughter told her she wanted to go out for the team.

“Aniah grew up playing football with all of her boy cousins,” said Echols’ mother, Latrenda Stephens. “She had to learn to love the sport so she could keep up.”

The only thing her mom was sure to make her aware of was the situation her daughter was putting herself into. After all, football is a man’s world and Echols was bound to face some challenges.

Echols said she hasn’t run into any issues with guys on the team or with other teams to this point, but she knows she gets strange and dirty looks. And out of all times in adolescence, middle school isn’t exactly the most mentally and emotionally stable time for either gender.

“The biggest thing that I’ve had to deal with is them seeing me as a girl and having these feelings that they wouldn’t feel before,” Echols said. “I have to keep my guard up, even though I’m here to play and have fun. I’m not here to mix business with pleasure, as my mom would say.”

The coaching staff was smart about the situation. Hardwick and the coaching staff sat her down before the season, making her aware of some of the challenges but making sure to let her know to come to them immediately with anything that made her feel uncomfortable, before it became an issue.

Logistically, it’s not easy. Echols changes down the hall from the rest of her teammates, in a locking bathroom off of the coaching staff’s meeting room. The team also has a female coach, Megan Wolfe. When she was in high school, she wasn’t allowed to play. Now, she plays defensive line for a Mississippi Women’s Football League team in Jackson.

“We have a team of 40 brothers and one sister,” Hardwick says. “We look out for our sister, and our sister has 40 brothers if there is a problem. Everyone has adjusted to the locker room dynamics and it’s no big deal now.”

It helps, of course, that sports are about the closest thing to a real meritocracy in today’s society. Since Echols is, as Hardwick said, is potentially the team’s best offensive lineman, of course he wants her around. If she wasn’t as good, who knows.

The Arizona Cardinals made history in 2015 by making Jen Welter, a former college rugby player and semi-professional running back, the first female coach in NFL history. Just a handful of months ago, the Tampa Bay Buccaneers became the first team to hire two female, full-time assistant coaches. To date, just 16 women have played college football, either in the United States or Canada. Only one of the 16 did so at positions that weren’t kicker or punter. Echols, on the other hand, is playing at one of the most physical positions on the field at offensive line.