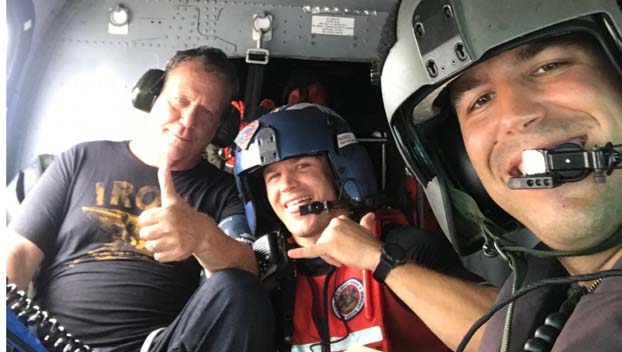 An MH-65 Dolphin helicopter aircrew from Coast Guard Air Station New Orleans poses with a man they rescued from a plane that crashed in the Gulf of Mexico approximately 8 miles southeast of Southwest Pass, Louisiana, Sept. 15, 2019. The aircrew hoisted the man and transported him to West Jefferson Medical Center in Marrero in stable condition. (U.S. Coast Guard courtesy photo)

A U.S. Coast Guard helicopter search and rescue crew pulled a pilot to safety after his small plane crashed into the Gulf of Mexico Sunday morning.

The man was rescued approximately 8 miles southeast of Southwest Pass, Louisiana, near the mouth of the Mississippi River, the Coast Guard reported.

Coast Guard crews received a distress alert from an emergency locator transmitter at 11:46 a.m. They also received notification from the Houston Air Route Traffic Control Center that a Southwest Airlines flight had relayed a mayday call from an unknown aircraft.

Coast Guard crews launched to search the transmitter’s location for signs of distress.

Involved in the search were:

The man was in the water and wearing a life jacket.

The aircrew hoisted the man and transported him to West Jefferson Medical Center in Marrero in stable condition.

“This is a great example of how being prepared can help the Coast Guard locate and rescue you if you need assistance,” said Lt. Cmdr. Brian Ward, an aircraft commander at Air Station New Orleans. “Wearing a life jacket and having an emergency locator device onboard, including an emergency position indicating radio beacon onboard a vessel, greatly increases your chances of survival and being rescued.”