Will fall ever get here? Summerlike heat, humidity to persist this week 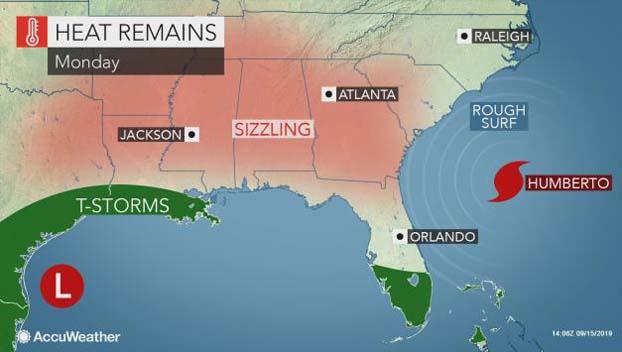 One week left until the official start of the fall season, so as you get ready to break out the fall gear, AccuWeather’s 2019 fall forecast is out and we have you covered for what type of weather to expect in your region.

Temperatures across much of the Deep South and southern Plains this September have felt more like July as a ridge of high pressure has sat stagnant for the majority of the month.

Multiple cities across the region have set numerous daily high temperature records, some of which have held for over 100 years.

Some of these cities will continue to challenge record temperatures in the upcoming week as the overall weather pattern will remain relatively unchanged across the South.

“Atlanta has an average high temperature of 83 for this time of the year, and highs are forecast to rise to record-challenging readings in the middle to upper 90s on Monday and Tuesday,” AccuWeather Meteorologist Robert Richards stated.

As the dome of high pressure continues to sit overhead, many interior cities will struggle to pick up much needed rainfall.

As of the latest U.S. Drought Monitor update last Thursday, more than 50 percent of the state of Texas is experiencing some form of drought. There are also pockets of drought scattered throughout the Southeast.

AccuWeather meteorologists are continuing to track a disturbance over the Gulf of Mexico that is expected to bring some beneficial rainfall to coastal portions of Texas and Louisiana early this week. Unfortunately, the inland extent of the rainfall will be minimal, bringing very little drought relief.

Progressing into midweek, a portion of the ridge of high pressure over the Southeast is expected to weaken, allowing for some relief from the mid-summerlike heat.

A northeasterly breeze across the Carolinas and Georgia will bring cooler air and lower humidity levels back into the area. Unfortunately, the reprieve will be short-lived, as the heat is expected to build back into this area by the weekend.

Meanwhile, a little farther west across the Deep South, the heat will continue its grip through the week as some areas may even have the thermometer top triple-digits. Regardless of the exact air temperature, AccuWeather RealFeel® Temperatures will exceed 100 F across a wide swath of the Deep South.

A stagnant air mass overhead will also lead to air quality issues across much of the South, especially in urban areas and locales that do not receive any rainfall. Children and people sensitive to high levels of ozone and pollutants in the air are urged to take caution while heading outdoors.

Latest forecasts suggest that there is little, if any, relief in sight across the Deep South and Texas through this weekend as the stagnant, summerlike pattern refuses to give way to more seasonable conditions.

Vapes spikes with illegal drugs: dark side of CBD