Rare, melon-headed whale nursed back to health on Mississippi Coast after shark attack 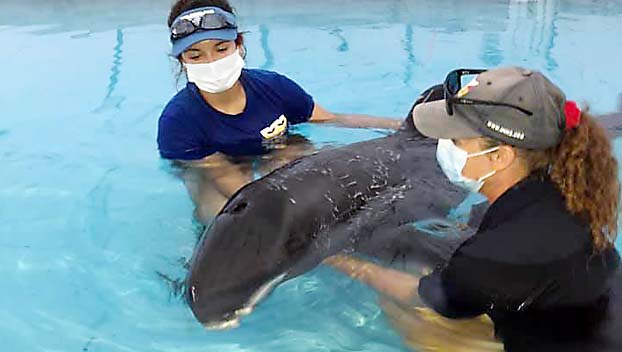 Veterinarians say that a rare whale found stranded along the Mississippi coast with shark bite wounds is showing signs of improvement in his recovery.

News outlets report fishermen spotted the melon-headed whale Thursday near Cat Island. Institute for Marine Mammal Studies researchers say the juvenile whale was in critical condition, and had bite marks and lesions on his body.

But veterinarian Christa Barrett says he’s making strides, and she hopes to get him swimming and eating on his own before releasing him.

The Gulfport-based institute’s director has also said researchers will test the whale to determine if his lesions are similar to those found on dolphin carcasses that washed ashore in record numbers this year. The wounds are thought to be caused by fresh water from Louisiana’s Bonnet Carré Spillway.