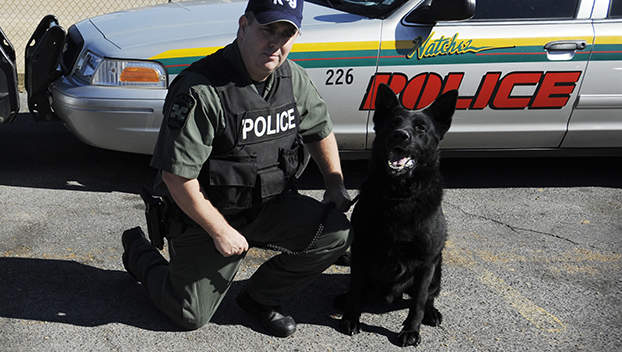 “We knew his days were numbered because of his age,” Armstrong said. “He was suffering some severe hip problems and also suffering from cancer. Therefore, he was pretty much semi-retired during the last several weeks because of that.”

Armstrong said Arko, a German Shepherd, who was on the force for approximately 10 years, died peacefully.

“He will be dearly missed because as a police dog he is just like an officer,” Armstrong said. “We are without a K-9, and we are certainly in dire need of one.”

In May, the Natchez Mayor and Board of Aldermen allocated $16,000 to purchase a new police dog and Armstrong said he is working to purchase the dog from Southern States K9 in Hattiesburg.

Benefits of a dog on the police force, Armstrong said, include assisting in searching for people, lost children, vulnerable adults and criminals on the run; searching and finding lost items, hidden evidence and thrown guns; and being able to seek out various narcotics hidden from view.

Armstrong said he also is working to raise enough money to purchase a second police dog for the force.

Armstrong said the Natchez Police Department had two police dogs at some point in the past and having two dogs would ensure the department had a police dog on duty for night and day shifts.

“We are working to that end but I think a lot of our donors probably thought that perhaps we had already raised enough money to buy the dog,” Armstrong said, “but that is not the case.”

A fundraising effort will be included at an upcoming dog event in Natchez on Sept. 25-29, Armstrong said, the Super Retriever Series Dock Crown Championship: Battle on the Bluffs and Hunting.

The Natchez Convention Center will sponsor a Canine Kid Zone that will have a blow-up slide (the largest in the region) and a cooling zone, which will cover about (3,000 square feet), said organizer Walter Tipton.

Admission to the kid zone, which is yet to be determined, will benefit fundraising drive for the Natchez Police Department to purchase a second police dog, Tipton said.

House of late philanthropist who surprised Mississippi town by…