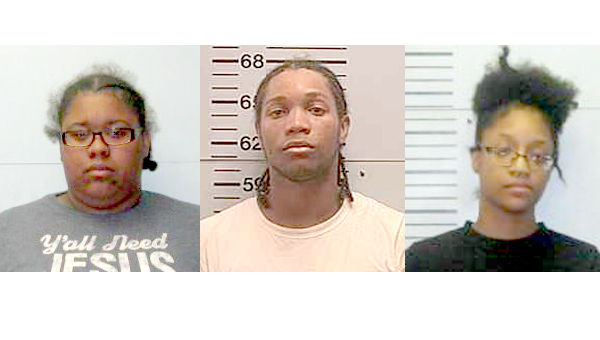 Princess Promise-Nichols, Cordarion Nichols and Lashari Green have all be charged with three counts of felony child abuse involving three children under the age of 6. All three suspects are being held in the Warren County Jail without bond.

Three children remain in protective custody, in an undisclosed location, while three adults are now being in held in the Warren County Jail. Each adult is charged with three counts of felony child abuse.

Each suspect is 26 years old and lists 915 Locust St. as their address.

Pace said Princess and Cordarion were married and was unsure of the relationship Green had with the couple.

According to Pace, Child Protective Services were notified of possible child abuse to three children all under the age of 6 on Aug. 1. On that same day, CPS took the three children into protective custody.

Tuesday, Sheriff’s Office Investigator Stacy Rollinson filed affidavits for warrants for each of the suspects. Wednesday, investigators took Promise-Nichols and Green into custody at the Locust Street address.

“These charges are connected to physical abuse of these children,” Pace said. “Some of the abuse will leave permanent scars.”

Pace, who said the case remains under investigation, declined to give additional details so as not to identify the children in any way.

Walmart says it will stop selling electronic cigarettes over…