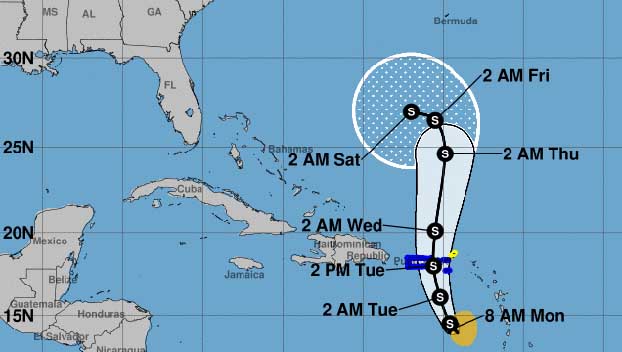 Tropical Storm Karen formed over the weekend and is expected to reach the U.S. territory of Puerto Rico in the several days.

The current forecasts shows the storm remaining weak over the next week and taking a mostly northerly track, but forecasters warn to keep a careful watch on Karen.

Computer forecast models currently show the storm, which may weaken from a storm to a tropical depression, is expected to make a sharp easterly turn late this week. Many of the computer models show it will likely turn and head toward the Gulf of Mexico.

Karen is expected to effectively crawl through the Caribbean over the next several days as it struggles against unfavorable conditions.

Karen is one of several tropical systems currently churning in the Atlantic which forecasters are watching carefully.

Although not an immediate threat to the U.S. people in the Southeast are encouraged to stay alert as the week continues and Karen’s future path becomes a little more clear.