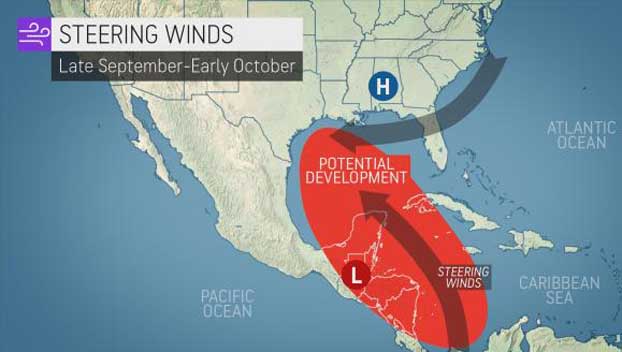 The Atlantic is teeming with tropical activity as Jerry, Karen and Lorenzo meander across the open waters of the Atlantic Ocean, and meteorologists say another threat could brew closer to the United States in the coming days.

The western Caribbean to the western Gulf of Mexico could be the next area to watch for potential tropical development into the first part of October, meteorologists warn.

“We expect a large counterclockwise wind pattern to develop over Central America in the coming days,” Dan Kottlowski, AccuWeather’s top hurricane expert, said. A broad circulation such as this is referred to as a gyre by meteorologists, and such a pattern could create a conducive environment for additional tropical systems to form.

“This gyre can sometimes help to spin up one or multiple tropical depressions or storms either in the East Pacific, western Caribbean or western Gulf of Mexico,” Kottlowski said.

There is a chance one such feature may try to organize during the second half of this week over the western Gulf of Mexico.

Steering winds would cause this feature to drift onshore in northeastern Mexico before too long, so time would be limited for significant development.

Meanwhile, a general uptick in showers and thunderstorms is expected over Central America and central, eastern and southern Mexico in the coming days as the gyre and smaller disturbances materialize.

Incidents of localized flooding, mudslides and gusty winds are possible.

The gyre, when combined with the circulation around high pressure over the southeastern U.S., can also pump moisture into South Texas in the coming days.

Depending on exactly where the plume of moisture sets up, the pattern could evolve from beneficial rain in some areas to too much rain and flooding in others, even in lieu of any tropical depression or storm.

Meteorologists are also monitoring for the potential for Karen to be pulled westward into the Gulf of Mexico during early October.

Karen is forecast to meander north of the Bahamas next week, when its path may become highly uncertain should it survive increasing wind shear.