Slain Mississippi officers remembered on anniversary: ‘We miss them everyday’ 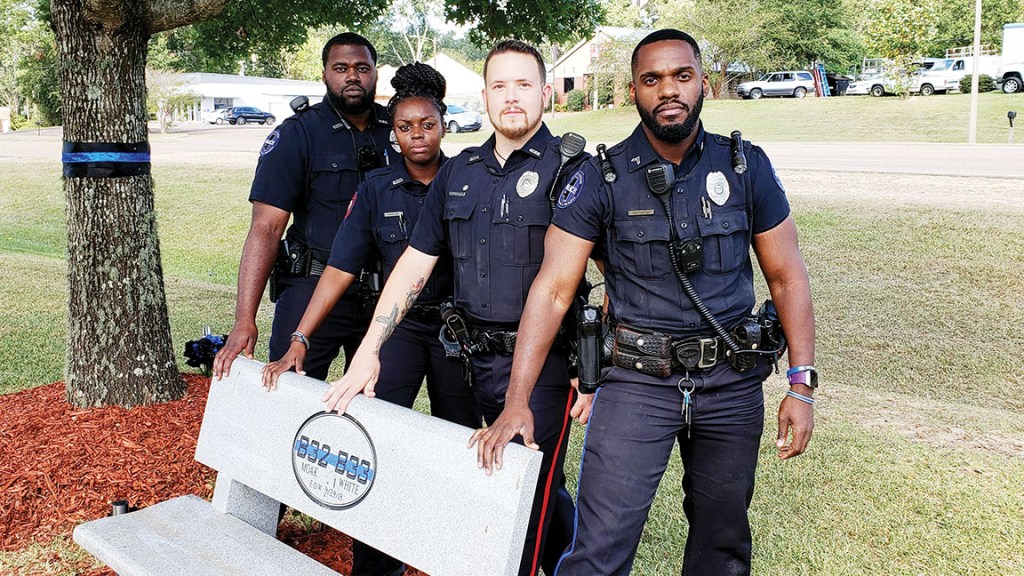 Bullets flew in a Brookhaven neighborhood a year ago Sunday and shattered two families’ lives forever.

And while the tragedy made each of the families smaller by one, it also caused them to grow by the dozens.

Since that day White and Moak were killed in the line of duty, the families they left behind have grown closer to each other, to the community the two heroes proudly served and to the police department that was their home away from home.

Vicki Moak plans to spend part of the anniversary of her son’s death with a ceremony for family by blood and by the badge, marking the occasion with balloons and a few words at the memorial bench in front of the police station. She has received much encouragement from her son’s co-workers in the past year.

“This has been hard on them, too, and we want to let them know that we know that they are suffering, too,” she said.

Laurie White won’t make it to the memorial get-together to honor Moak and her son. She’ll stay at home in Ashford, Alabama, to do her crying.

“There ain’t a day goes by I don’t think about him and I don’t miss him and this weekend is going to be so hard,” she said.

She plans to have lunch with her church family after Sunday service.

“I’m going to just try to make it through that, then just me and my husband will be to ourselves,” she said.

White said she’s grown closer to Jesus Christ since the fatal shooting. She recalled her son’s time served in Operation Iraqi Freedom with the Mississippi Army National Guard that earned him a Purple Heart. Gov. Phil Bryant awarded him a Mississippi Medal of Valor posthumously at the officer’s funeral for his line-of-duty sacrifice.

“I know that Kevin was saved,” she said, using the name James White used with his family. “I know where he’s at and I know that he’s out of pain because of the war. He had so many demons from the war.”

She said the tragedy has helped deepen her faith.

“It’s opened my eyes to help others realize that God gave his own son to us,” she said. “Our children are on loan to us and when God gets ready for them he’s going to take them and we have to accept that and trust that that’s the best decision.”

In the past year, Vicki Moak organized a charity, Warriors of the Badge, to raise funds that are distributed to first responders wounded on the job, or to the families of those who are killed in the line of duty.

In May, Warriors of the Badge presented its first check to the widow of Biloxi Police officer Robert McKeithen. The 24-year officer was gunned down just steps from the front door of the Biloxi Police Department earlier that month.

The group gave a check earlier this month to Concordia Parish Sheriff’s deputy Walter J. “Mack” Mackel. He was shot July 25 while investigating an armed robbery in Vidalia, Louisiana, and is recuperating from several surgeries.

Moak has three more checks ready to present when the beneficiaries are ready. Warriors of the Badge will give funds to two Madison County Sheriff’s deputies shot Sept. 5 on a domestic call involving a hostage situation. They were shot while attempting to apprehend the suspect.

They’ll also give financial help to the family of a Chickasaw County Sheriff’s Office investigator who died after his patrol car crashed Aug. 27.

And they plan to help the family of a Tuscaloosa, Alabama, police officer who was fatally shot Sept. 16 while attempting to serve a warrant in the city’s West End community.

Planning fundraisers for the non-profit charity keeps Moak busy and focused on bringing good from the tragedy that took her son away. Warriors of the Badge will host a Honor the Fallen Poker Run Oct. 12 and then set up a booth at the 34th annual Natchez Balloon Festival Oct. 19.

Also in the past year, the Moak and White families celebrated their sons’ sacrifices at the Peace Officers Memorial Service in Washington, D.C., during National Police Week in May. It was there that they were singled out of the audience by President Donald Trump as he spoke of the officers’ bravery.

“Last September, James and Zach responded to a report of shots fired at a home. When they arrived, they bravely engaged the shooters. It was a bad two minutes. It was violent and it was vicious. Within seconds, the killer shot James. At that moment, Zach could have raced to safety; instead, he raced to the side of his friend. As Zach tried to save his teammate, he too was shot and killed, giving his life for his brother in blue,” President Trump said at the televised ceremony. “Today we remember the words James once told his mom. He said, ‘Mama, if I ever die in the line of duty, know that I died doing what I truly loved.’”

Brookhaven Police Chief Chris Case said the department pushes forward, fueled by their memories of their brothers in blue.

“We miss them every day,” he said.

11-month-old Alabama twin dies after he and sister left…