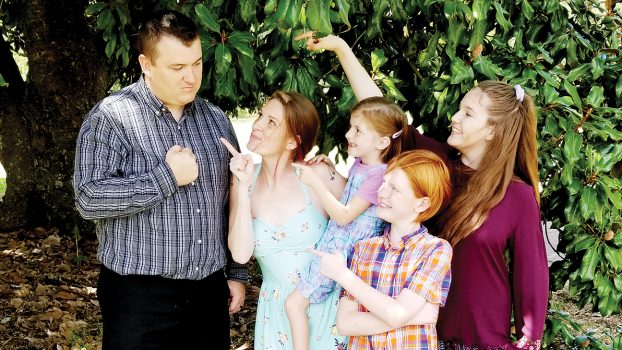 Photo submitted United States Army Staff Sgt. Jeffery Grimes surprised his family in Enterprise recently with his return from deployment to Kuwait. Pictured are, from left: Grimes, his wife Holly, and their children Amelia, Leonidas and Stardust.

Staff Sgt. Jeffery Grimes planned a big surprise reveal for his family when he returned from Kuwait, but the biggest surprise was on him — they weren’t home.

“I expected to walk in the house and none of them expect me to show up and it be that kind of a surprise,” he said.

Grimes spent the past year as a chaplain’s assistant with the 184th Expeditionary Sustainment Command in Camp Arifjan, Kuwait. He served as an administrative logistical and tactical specialist of the unit ministry team, which meant his job was to ensure that religious support was offered to meet the needs of soldiers through the U.S. Central Command area of operations.

His unit arrived back in Texas at Fort Hood in mid-September and his wife, Holly, knew he was there, but their children — 14-year-old Stardust, 12-year-old Leonidas and 7-year-old Amelia did not.

What Holly Grimes didn’t know, though, was that he was getting to leave the base a few days earlier than she expected.

After three deployments, he was finally able to plan a surprise reunion.

“I’m a big kid at heart. My last two deployments I was single. I didn’t have a family to come home to. I wanted that experience,” he said.

Though his wife wasn’t excited about it, she agreed to let him keep his arrival home a secret.

“I hate surprises,” Holly said. “I would have loved to know when he was coming home. I told him, ‘I don’t want to be walking around in sweat pants looking all frumpy. I’d like to throw on some mascara and make sure I shave my legs.’”

His flight from Dallas-Fort Worth International Airport was set to leave at 5:09 a.m. Sept. 14. He got up at 2:15 a.m. and cleaned the barracks, getting everything ready to go.

He calculated he’d be in Jackson by 8:35 a.m. and he’d be home in Enterprise by 10 a.m. several hours before she planned to leave for her parents’ house near Monroe, Louisiana, where Leonidas had been spending his summer.

She’s not a morning person so he figured she wouldn’t leave until afternoon to go to Louisiana and he’d be there in plenty of time to surprise them, he said.

Then the plan began to go awry.