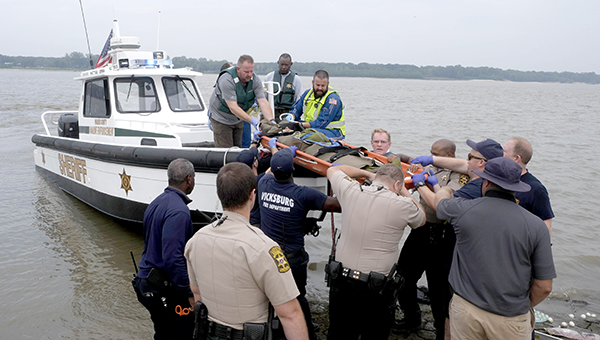 An early morning distress call Friday resulted in about an hours-long search and the rescue of a disoriented man from the shore of a small slough near LeTourneau, south of Vicksburg.

The man, who has not been identified, was flown by AirCare air ambulance to the University of Mississippi Medical Center in Jackson, Sheriff Martin Pace said. He said the man had no ID and described him as a caucasian man in his late 60s, or early 70s.

Pace said a piece of paper containing the names of people from out of state was recovered at the campsite, and “we’ll use that and resources from some other agencies to see if we can locate some relatives who may know who he is and make that verification.”

“There’s no signs of foul play,” Pace said. “This was apparently a medical emergency.”

Pace said the man called 911 from a disconnected cell phone and the call was picked up by a cell tower in Madison Parish, La. After talking with the man, Madison Parish transferred the call to dispatchers at Vicksburg-Warren 911.

At some point, the sheriff said, the man stopped talking and all the dispatcher could hear was his breathing.

“He wasn’t speaking at all,” Pace said. “911 worked with the phone company to get an approximate location of where the call was coming from.”

Vicksburg-Warren 911 dispatcher Paige Cook, who talked with the man, said he sounded like he was in pain, adding, “I stayed on the phone with him for 3.5 hours until I got units to him.

“He kept crying for help,” she said. “He kept going in and out, like he couldn’t really talk to me. He stayed with me the whole 3.5 hours. I would ask him questions over and over again, trying to get some information.

“He kept telling me that he couldn’t see, that he knew he was in a tent, and that’s all I could get from him,” she said.

Cook said the man did not know his name, his birthday or any other personal information.

“He didn’t know where he was; he kept asking me how he got there and I kept telling him, ‘I have help coming to you,’” Cook said. “He couldn’t tell me anything, he would just moan and cry.”

She said she was able to use GPS coordinates to direct rescuers.

Pace said Deputy Sam Winchester and county fire coordinator Jerry Briggs searched for the man in the department’s river patrol boat and found him about 9 a.m. in a slough, which was a little channel off the river that ran behind a small island several miles north of the LeTourneau landing.

“He was semi-conscious, extremely emaciated, and appeared to have been there for some time,” Pace said. “He was in a makeshift tent with quite a bit of survival gear and two kayaks, one with supplies and the other he was traveling in.”

Winchester and Briggs found the man in the tent, got him the patrol boat and took him to LeTourneau landing, where he was loaded into the helicopter and taken to UMC.

At one point, Pace said, the helicopter attempted to land on the island. When it couldn’t, the two medics on the helicopter were lowered and got in the boat.

“We don’t know how long he’d been without food and water,” he said. “He was in a position where you could not have seen him from the main channel of the river, so the commercial traffic could not see him. You had to go up in this little slough to find him.”

Pace said the man’s property was recovered and inventoried and is stored.

“We’re just happy that this is a rescue and not a recovery,” he said. “So many times when we have operations in the river, it does not have a good outcome, and we’re hoping that this gentleman will be able to recover and that this will be a success.”