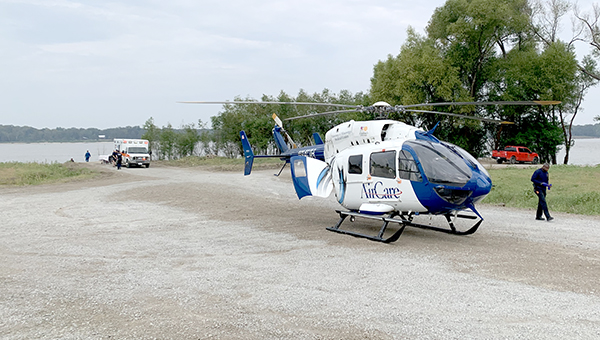 An AirCare air ambulance is positioned at the boat landing at LeTourneau awaiting the arrival by boat of a man who was injured early Friday in a boating accident on the Mississippi River. (Courtland Wells/The Vicksburg Post)

Warren County authorities are attempting to rescue a man who became lost on the Mississippi River.

Warren County Sheriff Martin Pace said 911 dispatchers received a call from Madison Parish 911 about 5:30 a.m. Friday from the man, who said he was in a tent and could not see and believed he was on a river.

Deputies searched the river and found the man on a sandbar in a slough in the LeTourneau area. Deputies were transporting by boat to the boat landing at LeTourneau, where an AirCare air ambulance was stationed.

Officials had attempted to have the helicopter land near the victim, but were unable to find a safe landing zone to extract the individual.

He is expected to be transported to University of Mississippi Medical Center in Jackson.