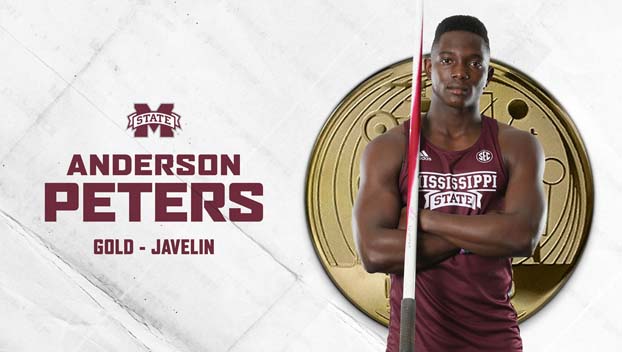 As a kid, Grenadian javelin thrower Anderson Peters would hurl sticks at mangoes and apples to get them to fall to the ground.

He had the best arm of all his friends. He showed it off on an even bigger stage.

Peters won the javelin throw Sunday night for his country’s second-ever gold medal at the world championships. He joins the ranks of sprinter Kirani James, the sprinter who captured the 400-meter title in 2011.

Peters remembers being glued to his television that day — and being inspired.

“That was an unbelievable moment for our whole country,” Peters said. “If he can do it, it’s possible for everybody to have a chance to become a world champion.”

A junior at Mississippi State, Peters’ winning throw was 86.89 meters as he added another title to the NCAA championships crown he won in June and Pan-Am Games win in August. Magnus Kirt of Estonia was second (86.21) and Johannes Vetter of Germany was third (85.37).

“There are no words to explain being a world champion,” Peters said. “I’m grateful for the chance.”

Growing up, he had two ambitions — be a famous cricket player or the next Usain Bolt.

But the javelin became his calling when on his first try at an event in primary school he broke the school record. All those days of throwing rocks and sticks at fruit in the trees in Grenada keeps paying off.

“We used to have races and say, ‘Let’s see who could pick the most,'” Peters said. “I was pretty good.”

Peters has to hurry back to school — he has two big tests this week.

Any chance his gold medal might help him buy some extra time with his professors?

“That’s not going to help,” Peters said, laughing. “As a kid, I was thinking about becoming a world champion and an Olympic champion and having the titles at the same time.”

One down, one to go next summer at the Tokyo Games.