Couple travels length of Mississippi River hoping to find ‘What is home?’ 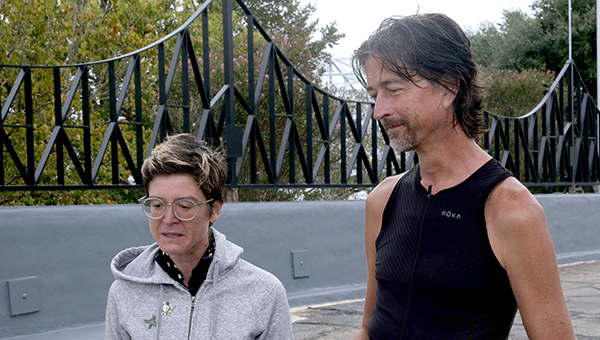 A couple made their way into Vicksburg Tuesday after running across the Old Mississippi River Bridge.

Growing up in South Louisiana and now having lived in Chicago for the past 10 years, Styrbiki said she began to question, “What is home.”

“I wanted to learn about the homes of people that are connected to that place (the Mississippi River) and how the water shaped those lands, those people’s home and how did they shape that water that ends up connecting to my home place,” she said.

And in doing so, Styrbiki said, listening to people tell their individual stories is the main focus of the project, and she hopes that by gathering this human data rather than just numerical data of the region, it will build empathy.

“This is kind of lacking in current controversies, divisiveness that we have in our culture,” Styrbiki said, adding, “so from all of these places that often seem disconnected, whether it’s the Delta or the North Woods of Minnesota or due to different races or different income levels, we need to listen to each other.”

Victoria, who is a social practice artist and researcher, runs a non-profit organization she has had for around eight years.

“This is part of what I do,” Styrbiki said of Relay of Voices. “I look at people’s lives to make meaning and to use storytelling to make change. The power of art is not just about making pretty pictures.”

For this project, however, Styrbiki said, she needed her husband’s assistance since she could not do it alone.

“I couldn’t travel the length of the Mississippi River alone on foot, I needed help,” she said, and because her husband is an avid cyclist and runner he agreed to come along.

Styrbiki said these names were suggested through friends and the Vicksburg Convention and Visitors Bureau.

“We’ve spent the last two years building partnerships in each town and city that we are traveling to to start accessing out who we wanted to talk to,” she said. “We wanted a diverse cross-section of the community — young, old, racial and cultural backgrounds and different relationships with the river or community.”

Styrbiki said as of right now, there is no ultimate goal for the project.

“The stories and the information have to tell me what to do with them, and we have not had time to process that yet,” she said. “This is a process-based work and it is about listening.”

From start to finish, Relay will have partnered with 29 convention and visitors Bureaus, 19 chambers of commerce, 30 arts, culture and educational organizations, 45 city and county governments, as well as hundreds of individual volunteers.

Other partners include the Great River Road, Mississippi River Network, Water Institute of the Gulf and Louisiana Seafood Promotion and Marketing Board.