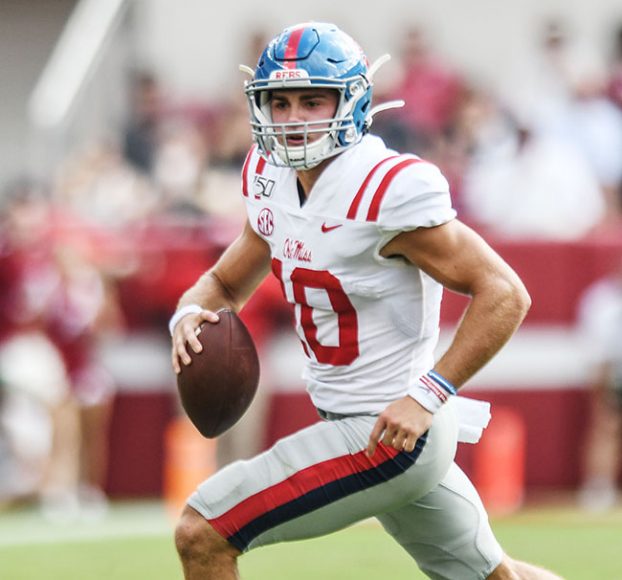 Plumlee rushed for 165 yards to lead a 413-yard rushing attack last week in a 31-6 rout of Vanderbilt. With Plumlee filling in for starter Matt Corral, who has been rehabbing a rib injury he suffered in the fourth quarter of the Rebels’ 28-20 loss to California three weeks ago.

Plumlee’s speed and quickness have sparked an Ole Miss offense that has rushed for 692 yards over its last two games. Freshman running backs Jerrion Ealy and Snoop Conner appear to be hitting their stride behind senior Scottie Phillips.

Ealy and Conner broke 75-plus-yard touchdown runs on back-to-back drives in the third quarter against Vanderbilt.

“Our guys do a really good job,” offensive coordinator Rich Rodriguez said. “We don’t have a lot of variety in our plays, but we do them in a lot of different formations and have a different approach to it. When you are playing with 11 with the quarterback as a factor, it gives you an edge.”

That rushing attack faces a far tougher test Saturday as Ole Miss (3-3, 2-1 SEC) travels to Missouri (4-1, 1-0). The Tigers boast the 12th-ranked run defense in the Football Bowl Subdivision and are allowing only 88.8 yards rush per game and 2.8 yards per carry.

“They do an outstanding job of not staying in one place,” Ole Miss coach Matt Luke said. “They’re constantly moving, stemming. They’re powerful and quick so again when you’re big, strong and fast that’s a good combination. They do a good job of moving around and creating problems for offensive line.”

Missouri coach Barry Odom said it’s “staggering” how well Ole Miss is running the ball. Missouri must try to slow down that running game without linebacker Cale Garrett, who injured his pectoral tendon last week in a 42-10 victory over Troy. Garrett was averaging 8.6 tackles per game to lead the SEC.

“Our guys hate it, obviously, that the injury happened, but we also know there’s nobody around in our conference who’s feeling sorry for us,” Odom said. “We’d better get to work.”

While Plumlee’s feet have provided a spark, his emergence has come at a bit of cost in the passing game.

Plumleee went 10 of 28 for 141 yards in a 59-31 loss to No. 1 Alabama and was just 10 of 18 for 99 yards against Vanderbilt. The Rebels were already a run-heavy team before Corral’s injury, but the current version of this offense with Plumlee at the helm will struggle for sustainability if it remains one-dimensional.

Corral is expected to be ready to play this week. Ole Miss coaches have made it clear they are open to the idea of playing both signal callers. Missouri appears capable of slowing down the Rebels backfield, so how does Ole Miss find balance?

“You have to be able to win some one-on-one battles out there on the perimeter,” Rodriguez said. “Whether it is a contested ball or beating press coverage — which we have seen every game this year — we have to win some of those. It has been an emphasis for us since camp.”

Ole Miss has a young receiving corps that is still trying to find its way after the departures of second-round draft picks A.J. Brown and D.K. Metcalf as well as DaMarkus Lodge. Freshman Jonathan Mingo has shown flashes of potential, junior Braylon Sanders has been sidelined with a hamstring injury for most of the year and Miles Battle and Demarcus Gregory have yet to make an impact.

The Rebels’ struggles on the perimeter are a layered issue, one that needs to be rectified if they wat to continue their success on the ground.

“We want to run the football,” Luke said. “But when people load the box and have some one-on-ones, we want to be able to make big plays down the field and try to capitalize on that.”

Ole Miss offers up beer menu, pricelist for its…