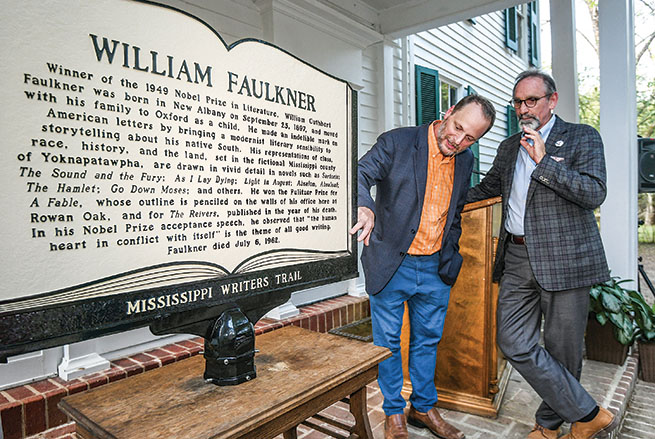 Bill Griffith, left, curator of Rowan Oak, and Malcolm White look over a literary marker honoring Nobel Prize winning author William Faulkner after it was unveiled at Rowan Oak in Oxford, Miss. on Thursday, October 10, 2019. The marker is the fourth one to be unveiled on the Mississippi Writers Trail. (Bruce Newman, Oxford Eagle via AP)

Last fall, Mississippi added to its lists of trail markers.

Joining the Blues, Country Music and Civil Rights Trails was the Mississippi Writers Trail. It began with the dedication of a marker honoring Eudora Welty at her home in Jackson on Sept. 11, 2018, and on Thursday, the fourth marker on the trail was unveiled.

“This is an exciting day for our community, and William Faulkner is one of our most famous citizens in Oxford,” said Jason Bailey, Ward VI Alderman and Mayor Pro-Tem. “His legacy will continue to live even after his death and this marker, on this ground, at his home, will continue to commemorate his literary contributions and attract visitors to our community for many years to come.”

Born in New Albany in 1897, Faulkner moved to Oxford with his family as a child. Faulkner purchased the Rowan Oak property in 1930 and lived there until his death in 1962. In 1949, he won the Nobel Prize in Literature.

“This place fed his imagination,” said Howry Professor of Faulkner Studies at the University of Mississippi, Jay Watson. “It fed his historical imagination. It fed his literary imagination, but that’s not all it did. This was a very important place for William Faulkner for very personal reasons.”

Created as an initiative by the Mississippi Arts Commission, the trail helps tell the story of Mississippi and its native authors. To ensure the accuracy of each marker, the Writers Trail Advisory Committee relies on a group of literary scholars selected by the committee to make recommendations as to the selection of writers to be honored with a marker and the location of the marker.

Each marker contains the author’s biographical information, including their birthplace, home, gravesite, museum or literary locale. Ensuing markers will span the state and include other Mississippians who have contributed to the state’s literary legacy. Other authors MAC hopes to place on the trail include Willie Morris, John Grisham, Barry Hannah and Larry Brown.

“This enterprise has been a long time coming and is a genuine way for our state to tell our story,” MAC executive director Malcolm White said. “I feel this initiative is very thoughtful, very positive and has great resources and will have a long tail for our ability to tell our story here in Mississippi. …The thing that this marker represents today is Mississippi finally acknowledging, collaborating and agreeing upon a story.”

Along with markers for Welty and Faulkner, there is a marker in Carrollton for Elizabeth Spencer and a marker at Jackson State University for Margaret Walker.