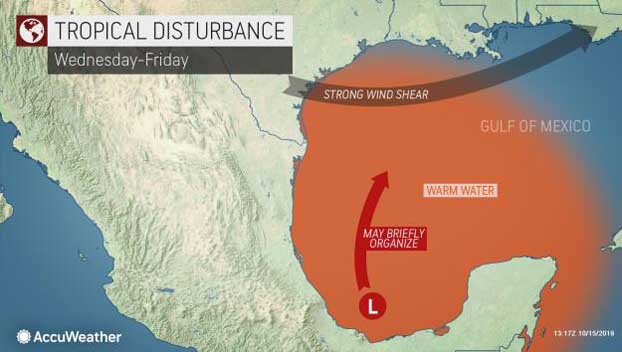 While Tropical Depression 15 still has a chance to become Tropical Storm Nestor in the eastern Atlantic Ocean by midweek, another area of disturbed weather set to move into the southwestern Gulf of Mexico bears watching for development late this week and this weekend.

AccuWeather meteorologists are keeping a close eye on a broad and disorganized area of showers and thunderstorms over Honduras, Belize and Guatemala and they are forecasting it to emerge into the Bay of Campeche on Wednesday.

“The system will be over warm water and within an environment of low wind shear upon its emergence into the southern Bay of Campeche,” AccuWeather Hurricane Expert Dan Kottlowski said. Water temperatures in the Gulf range anywhere from the low-80s near the U.S. coast to the mid-80s closer to Mexican and Guatemala coasts.

The direction the system takes following its emergence back over water will likely play a crucial role in determining whether or not it develops into a named tropical system.

“If it continues to move to the west or west-northwest, it will encounter increased wind shear Wednesday night and Thursday, preventing further development,” Kottlowski said.

However, he added, if the system turns on a more northerly track Wednesday night and Thursday, it will have more time to become organized by avoiding the greater wind shear and remaining over open water.

“Regardless of development, the system may cause a blossoming area of showers and thunderstorms over the Gulf and along the western and central Gulf Coast later this week into this weekend,” AccuWeather Senior Meteorologist Alex Sosnowski said.

In the short term, the storm will enhance shower and thunderstorm activity across parts of Central America and increase the threat of localized flooding into midweek.

It is not until later Thursday night or Friday that any moisture from this system would stream into parts of the Deep South, and not until the weekend that the heaviest rain would fall.

Even though heavy rain and thunderstorms will target the South through Tuesday night, any additional rainfall this weekend would still be beneficial since the latest U.S. Drought Monitor shows that moderate to severe drought covers much of the Southeast.

However, areas along the immediate Gulf coast could be dealing with flash flooding issues since these areas are most likely to be plagued by rainfall the longest, especially if the system were to stall for any amount of time.

If the system were to intensify more quickly than AccuWeather meteorologists currently expect, then the threat of potentially damaging winds and storm surge would increase along the coast.

There is still a large degree of uncertainty regarding the track and future intensity of this system, and both of these factors will be key in determining any impacts to the central and western Gulf Coast region.

Following Nestor, the next name on the list of 2019 Atlantic tropical cyclone names is Olga.