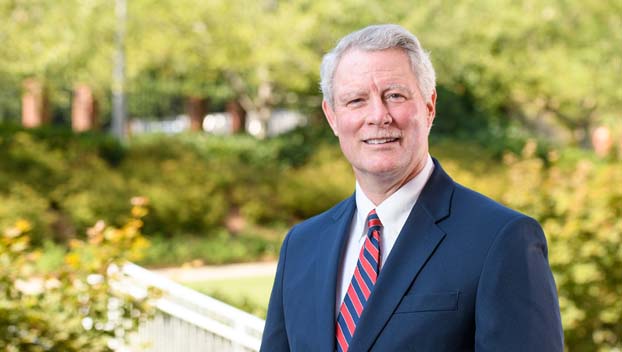 It has been a tumultuous two weeks since Boyce was announced by the Institutions of Higher Learning as Ole Miss’s next chancellor. On the day of his scheduled announcement, protests by student groups disrupted the press conference, which was eventually canceled by the University Police Department over safety concerns.

Following Oct. 4, there have been letters issued by campus organizations condemning the IHL and its process to hire Boyce – a process that ended a month before it was scheduled to end. The University’s Faculty Senate passed a resolution demanding the IHL disclose information pertaining to how Boyce was hired, which they did on Monday by releasing a timeline graphic.

Another protest also took place on Monday by the newly-formed Abolish IHL Coalition, which marched to the Lyceum steps and into the chancellor’s office to deliver their list of demands, including Boyce’s resignation.

“In the last two weeks, it hasn’t escaped me that there are passionate feelings about who leads the University of Mississippi. And rightly so,” Boyce’s letter sent to the University community on Thursday read. “I’m passionate about that as well. I just hope that the people who care about this university will judge my tenure as chancellor based on the results that we deliver.”

Boyce’s letter also addresses rumors that have been circulating regarding staff decisions that may have already been determined before Boyce arrived to Oxford. One was the hiring of Chip Pickering to serve in an executive role, possibly as the next athletics director. Boyce denied any of those rumors and reports stating, “We will take those up in due time.”

On Wednesday and Thursday, Boyce was in Jackson attending the IHL’s monthly Board of Trustees meeting, which requires every University’s chancellor or president to attend. Boyce states he has already met with a “number of student leaders, administrators and others in our university community,” which also includes the University’s Medical Center in Jackson.

Boyce said he plans to continue to meet with students, faculty and staff whom he has not been able to speak with yet.

“I want to hear your thoughts on what we need to bring our community together, and what we need to take our university to new heights,” the letter read. “Working together, we can tackle any challenge that we face.”