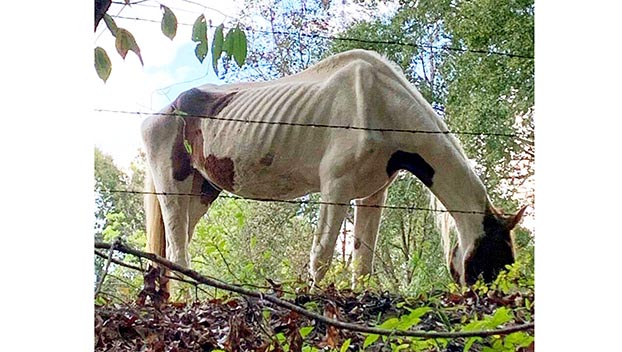 A veterinarian’s report filed Monday on the status of animals on a former Adams County Sheriff’s property concludes the animals are in appropriate health.

Charles “Chuck” Mayfield had the veterinarian’s report produced in compliance with an Oct. 7 Adams County Justice Court order after several people had complained that a horse and other animals on Mayfield’s property appeared to be malnourished.

“I individually examined four animals: a Jersey Steer approximately three years old; a paint Mare approximately thirty-three years old; a Dunn Gelding nineteen years old; and a Paint Gelding seven years old,” writes Dr. W. Byron Garrity Jr., DVM in the report. “All of the animals were in appropriate health considering their ages. All be it (sic); the thirty-three year old Paint Mare appeared unthrifty. This is not unusual nor a sign of neglect or abuse. She had full strength in all four legs, a normal temperature, and was grazing and moving normally.”

Adams County Sheriff Travis Patten said he is satisfied with Garrity’s report and that no further action would be taken on the matter.

“There have been so many people going back and forth trying to say that we were showing (Mayfield) favoritism because he is the former sheriff,” Patten said. “Nothing is further from the truth. We did the same thing with him (no more or no less) that we did with other people that complaints were filed on. Some of which have been well documented in this very newspaper.”

Patten said the ACSO put a policy in place last year to handle such animal complaints because the county cannot afford to seize every animal that needs better care from owners.

“We simply don’t have the money to do that, so we had to find a way to take care of the cost while meeting the need,” Patten said. “What we can do is hold the pet/animal owner responsible and make sure they pay for the care of their animal that they took on ownership of. For the people who complied with us, they finished the process with a new knowledge of how to care for their pets, a healthier pet and no charges. For those who didn’t comply with the process, they got jail time as the alternative option.”

In his report, Garrity noted that an area-wide drought this summer has taken a toll on pasturelands for grazing.

“Attempting to sustain horses on feed is often an uphill battle,” Garrity writes. “Hay supplies are inadequate or impossible to obtain due to the area-wide drought. I also observed fresh adequate feed, sufficient hay and clean potable water in sufficient quantities from an automatic water trough. There was evidence of recent Ferrier activity and it’s obvious the horses are stalled at night. In my expert, professional opinion, there is no evidence anywhere on the premises of animal abuse or neglect.

“Mr. Mayfield has adequate knowledge and skill in animal husbandry and is using it to take care of these animals.”

“In this particular case, the vet said that horse is healthy,” Patten said. “We are not vets, we are law enforcement who investigate complaints of animal cruelty amongst other things. That is what we did in this case and the animal was cleared with a clean bill of health. This closed the case with us and hopefully now, the horse and the owner can live the rest of their lives together in peace.”