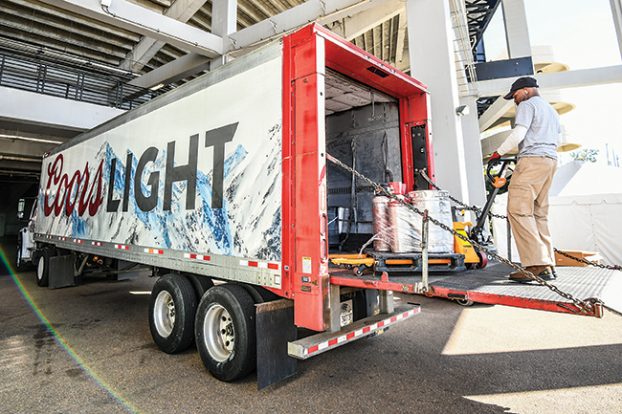 For the first time, beer prepared for legal distribution was delivered to Vaught-Hemingway stadium on Thursday, ushering in a new era for Ole Miss football fans.

Ole Miss will be the second Mississippi university to offer beer during football games come Saturday.

The Rebels’ home game against Texas A&M will be the first game in which beers will be served inside the stadium, and beer will continue to be sold the remaining home games against New Mexico State (Nov. 9) and LSU (Nov. 16).

On Oct. 7, the list of beers and how much they will cost was released by the athletic department. There will be six beers, as well as Henry’s Hard Sparkling Water, available for fans over age 21 to purchase.

There will be one Mississippi-made beer available out of the six. Suzy B is an American blond ale made by Hattiesburg’s Southern Prohibition Brewery.

Customers wishing to indulge in the beverage must be 21 years of age or older to purchase. A valid government identification is required for each purchase. There will be a limit of two drinks per person, per transaction and sales will stop at the end of the third quarter of each game.

“This is another opportunity to enhance what is already one of the premier game days in college football,” interim athletics director Keith Carter said during the University’s initial announcement in August. “I want to thank (then- Interim) Chancellor Sparks and the rest of our University administration for their leadership and support during this process. We expect this decision to help reduce incidents associated with overconsumption on game days. The athletics department will work hand-in-hand with other campus officials and within the guidelines of the SEC to ensure a safe and responsible environment for all fans.”