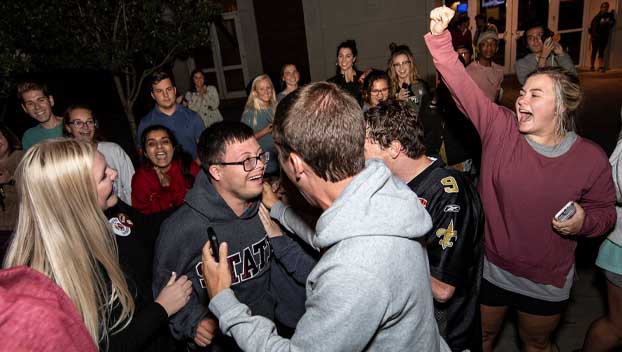 When he was 10 weeks old, Spencer Kirkpatrick — an ACCESS student at Mississippi State University — had open heart surgery at Monroe Carell Jr. Children’s Hospital at Vanderbilt.

Then, some of Spencer’s teachers told his father — Kevan Kirkpatrick — that it would be hard for him to learn because he was born with Down syndrome, a chromosomal condition that can affect cognitive ability, physical growth and development.

“He has always adapted with his challenges,” Kevan said. “We’ve also been fortunate to be surrounded by people that adapt with him.”

Spencer’s ability to not only adapt but thrive was evident Oct. 8, when he was named MSU’s homecoming king.

“My friend, Shannon Johnston, taught me that when someone like Spencer comes into the world, an opportunity to realize true human nature presents itself and it comes in the way other people treat that person,” Kevan said.

“In his time at MSU, we have seen the most beautiful side of human nature, from friends, family and strangers who became his best friends. From the staff of the ACCESS program that taught and advocated on his behalf to the entire Mississippi State family that has embraced him.”

Spencer, speaking the weekend prior to the vote, said it would be amazing if he were to be crowned homecoming king.

“I would be excited, raising the roof,” Spencer said.

‘HE LOVES THIS SCHOOL SO MUCH’
Spencer, who graduated from Tupelo High School in 2016, always wanted to go to college. He grew up attending Bulldog basketball and football games with his dad, an MSU alumnus.

And his brother attended Ole Miss.

Harris “is Spencer’s hero and he wants to be just like him,” Kevan said.

Spencer’s opportunity to go to college — just like his brother — was realized when he was accepted into MSU’s ACCESS program, a four-year, non-degree program for students with intellectual or developmental disabilities.

“I was so excited when I got my acceptance letter to MSU,” Spencer said during a recent interview.

As part of the ACCESS program, students are assigned mentors to help them with various life skills and daily tasks. Susannah Cox, a former mentor and Spencer’s friend, said it’s hard for students not to love Spencer.

“He loves this school so much and he just keeps defying odds all the time,” Cox said.
Cox, who served as Spencer’s homecoming campaign manager, sums up Spencer’s role as a student.

“There were a lot of students who had a long list of things that they can put on their resume. But Spencer has a lot to offer, too, and he’s learned life skills and learned to survive on his own on a college campus,” she said. “What he has learned through ACCESS program will carry with him through the rest of his life.”

“To elect someone who is not the typical student says a lot about MSU students,” Cox said.

“Whenever we pulled up to the Union, everyone was coming up to him saying that they hoped he won and they were so excited for him,” Cox said. “I was kind of nervous because I really wanted him to win and I knew in the bottom of my heart that he did win, but I still had that little bit of fear.”

‘NEVER SHIED AWAY FROM GETTING HIM INVOLVED’
Spencer has always been an active student. He grew up playing city league sports and participating in organizations in Tupelo. In high school, he assisted his gym teacher — Patty Norwood — with the swim team.

At MSU, Spencer participates in intramural sports. Football is his favorite.

“We never shied away from getting him involved in things,” Kevan said. “These experiences make him feel comfortable to let him know he can go out and do things he wants to do.”

“When he told me he was running, I was shocked, surprised and happy, but this is right up Spencer’s alley,” McLaurin said. “Him running for homecoming king gives me hope in every sense. He’s making a difference not only on our campus but for countless other kids around the world.”

Even if Spencer had not been elected homecoming king, he would have been equally happy for the winner, said his father.

“It was not about him just doing this to win,” Kevan said. “It’s about him participating in it and his journey of things he has overcome.”

Spencer, along with homecoming queen Rachel Dumke and other royalty, will be recognized at halftime of the Bulldogs homecoming game on Nov. 23 when they play Abilene Christian University.
Until the big day, Kevan plans to embrace his son and reflect in the growth that he has shown over the years.

“It is beyond words,” Kevan said.

“Not too long ago, it was inconceivable that he would go to college. He loves the environment, atmosphere, and all of the other students. And on top of loving Mississippi State, it’s just amazing.”