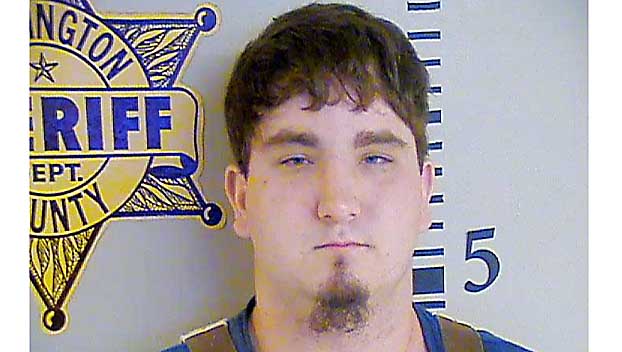 Two Mississippi men were arrested and a third is at large after Alabama police say they tried to kill deputies and game warden with gun fire and by running them over during a chase that crossed from Mississippi into Alabama.

Washington County, Alabama, Sheriff’s Office deputies report they were called at approximately midnight Saturday by neighboring deputies in Wayne County, Mississippi. The Mississippi deputies reported their deputies and Mississippi game wardens were chasing a Silver Chevrolet truck that was crossing into Alabama.

Alabama deputies, local police and state game wardens began looking for the truck and engaged it in a pursuit.

The driver, later identified as Jacob Paul Davis, 20, of Waynesboro, Mississippi, reportedly tried to strike an Alabama game warden with the truck and continued fleeing the pursuing law enforcement officers.

A passenger in the truck, later identified as Caleb Strickland, 21, of Buckatunna, Mississippi, reportedly opened the passenger door of the truck and shot a rifle at the pursuing officers.

During the chase Davis reportedly tried to strike a Chatom, Alabama, police officer with the truck.

Officers eventually forced the truck off the road and arrested Davis and another passenger, Shaun Hinton, 20, of Buckatunna, Mississippi.

Strickland fled from the vehicle is and wanted by authorities.

Davis was charged with attempted murder of a police officer, reckless endangerment and attempting to elude law enforcement. He was being held in the Washington county Jail on a $35,000 bond. Strickland is wanted for the same charges.

Hinton was arrested by Mississippi authorities for violations that occurred in Mississippi that started the chase. Specifics of those charges were not immediately released.

Anyone who knows Stringer’s whereabouts is asked to call 911.