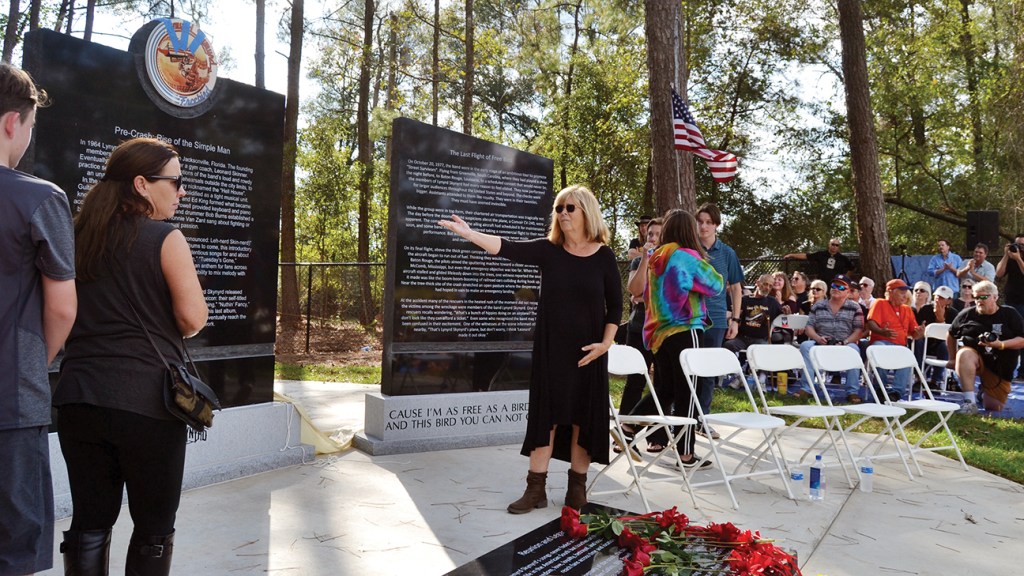 Judy Van Zant Jenness, widow of Lynyrd Skynyrd lead singer Ronnie Van Zant, gestures toward the unveiled monument as her daughter Melody — Ronnie’s only child — stands to the left of the memorial. (Photo by Donna Campbell )

The widow of Lynyrd Skynyrd frontman Ronnie Van Zant placed a red rose at the base of the monument before she helped pull off the beige tarp covering the marker built to honor the six who died in the plane crash 42 years ago Sunday.

Judy Van Zant Jenness at times seemed overwhelmed by the hundreds of fans who came for the marker dedication, which was held in Gillsburg about 400 yards where her husband died over four decades earlier.

“Today I am here with all of you to be a part of this ceremony paying tribute to Ronnie Van Zant, Steve Gaines, Cassie Gaines, Dean Kilpatrick and Walter McCrary, William Gray and the surviving members of Lynyrd Skynyrd,” she said. “Also, the community who aided in the rescue and the first responders who treated all the people that were injured. Our family would like to thank you, all of you, for everything you’ve done to make this day happen.”

The 15,000-pound memorial was created by Dave Pace and Kevin Laird at Brookhaven Monument. Laird is credited with the design of the three panels of black granite from Uruguay. It was installed on land donated by Dwain Easley, who was one of the dozen or so rescuers from that night.

“It’s been 42 years today since we lost Ronnie, Steve, Cassie and Dean. We will never forget them and they will live on through the music of Lynyrd Skynyrd and all of the fans around the world. Thank you fans,” she said.