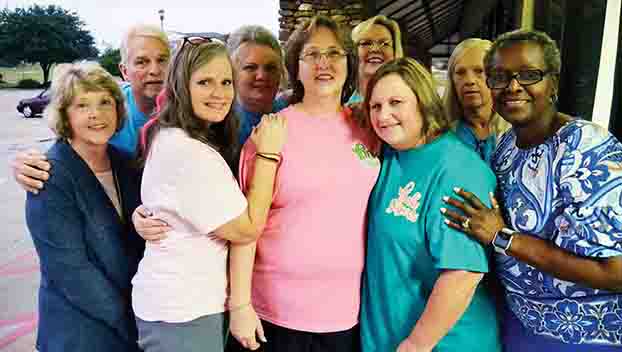 Tammy Cline was a registered nurse at a nursing home in Hazlehurst when she mentioned to a doctor there that she thought she had a lump in her breast. Dr. Fred McConnell insisted that she have a mammogram right then, and a sonogram the same day.

The diagnosis a week later, in 2001, showed Cline had stage two adenocarcinoma, the most common type of breast cancer. It was a year after she’d graduated from Copiah-Lincoln Community College, and the Wesson resident had a husband and three children.

“I was angry,” Cline said. “I pushed everyone away from me. I had a husband and three girls but I was in bondage. I didn’t reach out to anyone for help. I held my feelings in.”

Her treatment included reconstructive surgery and six months of chemotherapy in Jackson, and she moved north with her family to the Booneville area so she could avoid being around people she knew.

She started taking tamoxifen, a five-year pill to reduce the reoccurrence of breast cancer.

But in 2007, a year and two months after ending the pill, something seemed odd. One night, while Cline’s husband was in Wesson taking care of family business, she felt a seizure coming on and called for her youngest daughter to get in bed with her.

A week later, she was driving to work at a nursing home when she felt God tell her to turn around and go home. She called in sick.

“I was on the phone with my mother in Brookhaven when I had a grand mal seizure,” she said.

An ambulance came for her, and immediate plans were made for her children, daughters in elementary school, high school and at Mississippi College.

Cline had developed the same type of cancer, this time, in her brain. She had radiation treatment and the cancer had now metastasized to her lymph nodes, which she now deals with daily.

“I was still in the stages of grief, like I was dying, and didn’t want people to think, ‘Oh, poor, pitiful Tammy.’”

She didn’t want company. A friend stuck a bookmark in her door that said, “A friend loves at all times.” The significance didn’t strike her then, but it later would.

The Clines moved back to Wesson in 2008 so she could be near family. She couldn’t drive. She could no longer work. She couldn’t shower alone. She needed help.

In church one day, Cline flipped open her Bible and John 12:15 caught her attention: “Oh, daughter of Zion, do not be afraid.” She asked her pastor if that was confirmation. “Absolutely,” he replied.

“The second go-round with cancer, I began to feel like God can take me home when he’s ready,” Cline said.

She found her calling one day while she and her husband were at the Wesson Flea Market. She saw a table where the Pink Ladies support group was were selling T-shirts in support of breast cancer awareness. She wanted one, and she later joined the group.

The group meets once a month in a luncheon at Broma’s Deli in Brookhaven. Members give each other encouragement, especially those recently diagnosed. The group also helps find prosthetics and wigs and helps each other however needed.

Cline had been told that her hair might not grow back. One Sunday in church, she was testifying about God’s goodness and she pulled off her wig, and said, “This is the power of God.” Her hair was growing back.

Cline said she realized that God has allowed her to beat cancer, not once, but twice, so she can help others walk through the frightening stages of grief.

“I try to encourage others to not be as stubborn as I was at seeking help,” she said. “It’s easier for me to talk to people as a lay person, not as a nurse. As a Christian, I know it’s easier to have faith in God.”

Cline said she counts her family among her blessings. Her girls are married, and she has three sons-in-law, five grandchildren, and her husband Walter, who never gave up on her.